JWT Singapore's chief creative officer Valerie Cheng ascended to that position in March 2013 with the mission of making digital a core competency at the WPP agency. It's a tall order, but perhaps not so much for Ms. Cheng, who was named the digital creative director of the year by the Institute of Advertising Singapore in both 2011 and 2012.

Under Ms. Cheng, JWT Singapore has dazzled us with efforts like "Smell a Memory," a project for scent company Givaudan that created bespoke fragrance kits for patients suffering from Alzheimer's and dementia,to try and evoke emotional memories.

We find out more about Ms. Cheng in this week's installment of "Six Things."

1. She has a knack for painting. The one below, which she gave to her husband while celebrating their first Valentine's Day together, now hangs in the couple's living room. 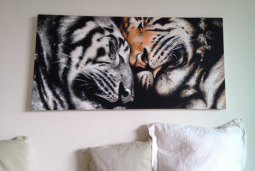 2. She has an odd habit: She pulls her hair, compulsively. She's been doing it since she was nine, and does it when she's thinking or stressed. 'I'm trying to manage this behavior so it doesn't leave a bald patch on my head," she said.

3. Her dream job? A zookeeper. "I would be happy scooping elephant poo." 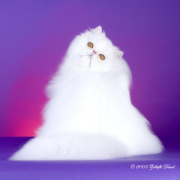 One of Ms. Cheng's Cats

4. She's a cat lady. She used to present her Persian cat pets at shows. It's an expensive hobby -- and a dangerous one, since she's also allergic to cats.

5. She cries when watching Casper The Friendly Ghost-- and pretty much anything else. It's a habit with a sad history. When she broke up with her first boyfriend, she would force herself to cry more than she needed to, thinking God might take pity on her and make him come back.

6. Her biggest regret is not being able to sing.