Time's Up/Advertising: 'The goal was never perfection. It's action.' 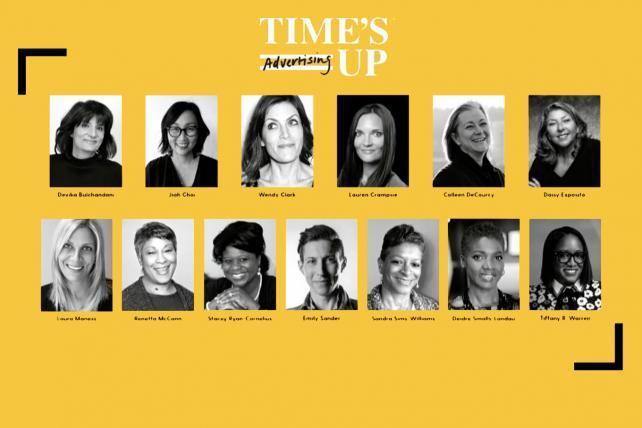 Time's Up/Advertising convened its first meeting in cities around North America Monday to talk about the group's goals for the future and what needs to be addressed in terms of sexual harassment and systemic inequality in the workplace.

But first, the group's leaders addressed some of the concerns industry women had about the group itself that boiled up over the weekend. Time's Up/Advertising announced it would open the 14-city event up to all industry women after originally saying it would only welcome "women who work in advertising agencies." The decision brought backlash from freelancers and others who are not currently employed in the industry. Time's Up/Advertising apologized in a Facebook post Sunday night and said freelancers and those between jobs were also welcome.

"Clearly, some mistakes have been made on our way to get to this room," Colleen DeCourcy, Wieden & Kennedy Global chief creative offier, said at the event. "It's been a tough weekend for everybody."

Women from Time's Up/Advertising's steering committee spoke in New York Monday afternoon, sharing the group's core values and work committees. The event included a Q&A discussion with Time's Up founding organizer Nina Shaw and a panel discussion. The event was streamed on Facebook Live. Organizers said they believed the New York event had nearly 700 attendees, with 400 in L.A. and "hundreds more" across other North America events. Each event tuned in to a stream of the New York event, then broke out for more private town hall conversations in each city

"We don't have all the answers," said Wendy Clark, DDB Worldwide CEO. "It is up to all of us to create that knowledge and sharing."

Laura Maness, Havas New York CEO, added that this is the beginning of the group's efforts.

"I would ask for all of your graceful understanding," she said. "Has it been perfect? No. But it is absolutely our ambition and we want to move forward together as one community."

She said that though the small steering company had come together to start, "it was an attempt to put a face and bring some accountability to this group. But this group is all of us and together all of us are going to be far more effective at driving impact than any of us. The goal was never perfection. It's action. … we feel that imperfection and action is better than being perfect and having no action."

"We're going to keep learning, we're going to keep pushing to understand and we're always to diagnose even if we have smaller numbers … that will keep us honest as we work toward the progress that we all want to achieve in this room," she said.

DeCourcy also shared a letter she said Gloria Steinem had sent with the subject line: "For you to read out loud only if there's time if you think it helps." The crowd laughed.

The note began: "I wish I could be with you today raising consciousness and standards in the ad world, the biggest influence on human behavior. Create ads with men raising children and millions know it's possible. Show girls playing sports and girls see that our bodies are instruments, not ornaments. Show diverse people together and diversity becomes community. That's why Time's Up in the ad world will create such a multiplier effect for us all."