'We Are Asking Ourselves What to Do,' Says Message Posted After Two Police Shootings
READ THIS NEXT
How agencies are responding to the Delta variant 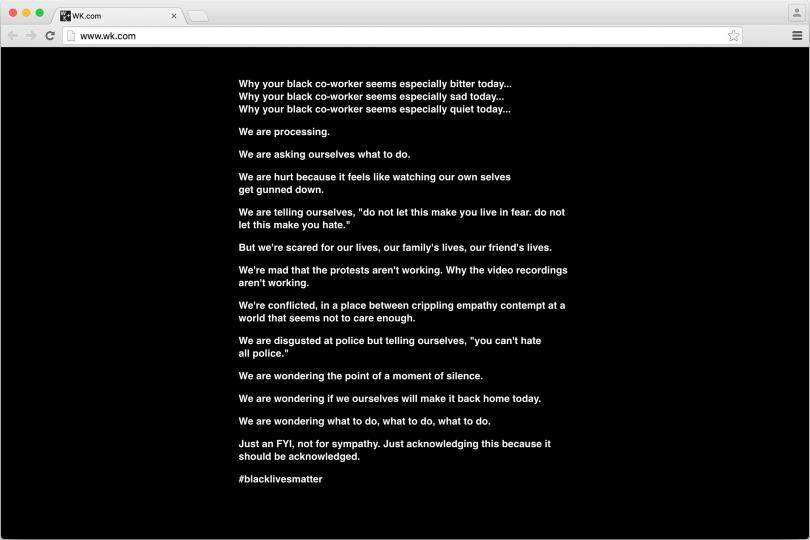 If you haven't visited Wieden & Kennedy's website today, then you haven't seen the powerful message the agency posted in the aftermath of two African-American men shot by police this week.

"Why your black co-worker seems especially bitter today …" the post begins. "We're conflicted, in a place between crippling empathy contempt at a world that seems not to care enough." The message is brief and links to the agency's other work are not available. It concludes with: "Just an FYI, not for sympathy. Just acknowledging this because it should be acknowledged," followed by the #blacklivesmatter hashtag.

The message is a response to the shooting deaths of Alton Sterling and Philando Castile, who were both killed this week, one day after the other, by police officers. Mr. Sterling was shot in the chest and back outside a convenience store in Baton Rouge, La. on Tuesday. (The Justice Department on Wednesday opened an investigation into the shooting.) Mr. Castile was shot Wednesday in his car in Falcon Heights, Minn.

Videos have emerged of both shootings. Mr. Castile's girlfriend, Diamond "Lavish" Reynolds, filmed a live Facebook video immediately after he was shot. In the video she said that he was licensed to carry a gun and let the officer know that he had a gun on him but was reaching into his pocket to get his wallet and identification out of his pocket when he was shot.

Wieden & Kennedy did not immediately respond to a request for comment about the message.

People will likely compare it to Beyonce's statement, called "Freedom," which she posted on her website in the wake of the two killings. Although W&K's message might be similar, it stands on its own, especially since many other agencies or marketers have remained silent.