If Creativity's agency of the year represents a new model company coming into its own, the year's top production company proves the adage, if it ain't broke, don't fix it. That philosophy has served 20-year-old MJZ well over the last decade, during which the shop arguably has been the most dominant player in commercials production. In recent years, as other companies have attempted to diversify their offerings beyond spots to accommodate the shifting advertising scene?which has seen digital innovation and integrated campaigns become more norm than novelty?company president and co-founder David Zander believes it's enough to play to classic strengths.

"At the end of the day we are supplying, in essence, small films, whether they're a commercial or a branded short," Zander says. "If you've got directors with big brains, they're going to do good work, no matter where it airs, whether it's animated or with puppets." Through this straightforward strategy MJZ earned the 2009 honor of Creativity Production Company of the Year, securing its second set of back to back titles?and its fifth nod of the decade. (It took the prize last year, in '05, '03 and '02).

The rattled economy and its attendant fear made it difficult and risky for anyone to stand out creatively in '09. But for MJZ, the work was conspicuously strong. Director Tom Kuntz was the 2009 MVP. He built on Fallon London's?and his own?candy legacy with some carefully trained eyebrows for Cadbury, he extended Goodby's White Gold franchise into the 20-minute Battle for Milkquarious rock opera and turned out even more spectacular moments partnering with Wieden + Kennedy.

The inner turmoil of a disgruntled office worker couldn't be conveyed any more accurately, or hilariously than in the Kuntz-directed "Tips" for Career Builder. The director also added more ammo to Coke's happiness arsenal in the flirtatious "Library" and was instrumental in taking the "Old" out of "Old Spice," on ridiculously funny spots like "Scents for Gents." It also didn't hurt that he snagged the title of the year's most globally awarded director in our annual Creativity Awards Report, helping to steer MJZ to a repeat as most awarded production company.

Fellow director Rupert Sanders, 2008's most decorated director, added even more heft to MJZ's reel. He re-teamed with T.A.G. San Francisco for Halo ODST's "The Life," the follow-up to the much honored "Believe."

He was also on board for TBWA/Chiat/Day, New York's Anthem spot for Absolut, and in perhaps the year's most artsy feat of production, he carefully choreographed Droga5's debut spot for Puma, in which virtual clothing was projected in camera onto the bodies of a pair of dancers.

Other notable moments came from indie director Harmony Korine, who shot a series of dark vignettes for Liberty Mutual, and from Spike Jonze who stepped out of the Where the Wild Things Are promotional tsunami to shoot sumo and Brad Pitt spots for Softbank and a cryptic short in which Kanye West confronts his little demon. Dante Ariola set creatures loose too, for The Ladders, out of Fallon Minneapolis, and for HP's In the Air, out of Goodby, while Phil Joanou was behind a round of 3D spots for the U.S. Air Force. Zander built out his roster cautiously this year, adding only collective Pleix, who directed a Lexus package, and O Positive directors Jim Jenkins and David Shane to the shop's London lineup, yielding a Shane-directed Doritos tale out of AMV BBDO, in which a man lives out his Guitar Hero dreams. The London hub also produced Fallon's latest Sony experiment, in which creative/director Juan Cabral helped turn an Icelandic town into a giant soundsystem.

Yet, as with any top production company, it's not just about the directors. "MJZ's executive producer Jeff Scruton and team of producers are so pro," notes W+K Portland's Eric Kallman, the writer on Old Spice, CareerBuilder, and multiple Kuntz-directed award winners for Skittles, out of TBWA/Chiat/Day. "Once Tom wanted to shoot a campaign with us but the money was really tight. It was ten shoot days, and four huge spots. But they worked with our agency literally night and day for over a week to make it work, when honestly no one thought it would. The producers are as talented as the director roster."

TBWA/Chiat/Day head of production Matt Bijarchi worked with the company on its latest content-driven piece for Absolut, the 30-minute Spike Jonze-directed "I'm Here," the only brand-sponsored film to premiere at Sundance's first ever opening night shorts lineup this year. "Their model remains fairly traditional at the moment, but they know what they're doing," Bijarchi says. The Absolut film was "a 14-month process of script development, production, post and distribution" and was "anything but traditional. The entire process has been out-of-your-comfort-zone thinking for all of us, and they have been by us every step of the way."

Meanwhile, Zander isn't blind to the changes around him. The industry's shifting attention is "definitely something that we've talked about as a company, but I think that it feels still like it's in its infancy. Things will change, but I don't think we'll see a completely different landscape that we wouldn't recognize in ten years. I think it's going to be commercials, plus other things. Focus is critical in getting anything accomplished, and right now I still believe what we have?the modified version of the traditional production company? is still the most viable way to spend our energy." 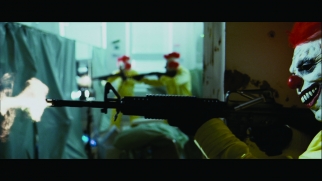 That said, it's been Creativity's mandate to honor not just the best work, but also the innovators who are redefining creative production. Stink emerged as one of this year's frontrunners. The global, multi-hub company has long been known for its top notch commercials production. It continued to deliver on that front with spots like the Ivan Zacharias-directed VW Fight, in which a designer gets into a tussle with himself and then some; a James Brown-directed roller girl show for Bonds as well as more dynamite visuals from Ne-O, who steered Audi's Economy Drive, Frank's Braincrashers and Toyota's Better Together. The shop's biggest highlight, was Philips Carousel, via the company's new media arm, Stink Digital. Directed by Adam Berg, the viral bandit clown hit was also a critical smash, earning digital and film accolades, including the 2009 Cannes Film Grand Prix.

Philosophically speaking, our production company of the year could have been B-Reel. The Swedish shop was already a digital darling thanks to its multiplatform productions like Goodby's much decorated Hotel 626. It remained on top of that game in '09 with the Doritos' horror sequel, Asylum 626 as well as host of other standout interactive efforts like TalkTalk and X Factor's Brightdancing campaign out of Chi & Partners, and Axe's 100 Girls site, via BBH, N.Y. Meanwhile, in a production reverse backflip, the shop built out traditionally, partnering with Swede shop St. Paul and to launch B-Reel Films, and beefing up its N.Y. team with director Anders Hallberg and EP Kathrin Lausch?a setup that, perhaps, gives a glimpse of the "standard" of the future.