As Father's Day Nears, Brands Need to Lose the Stereotype of the Working Dad
READ THIS NEXT
Opinion: Will Sorrell's exit help creativity regain center stage?

I just turned 44 years old, and I've been in the advertising industry for 17 years. I have two daughters and Father's Day is just around the corner. As someone who crafts ad campaigns and marketing tactics for a living -- toiling in the throes of the persuasion economy -- I think I know how to entice and cajole people to buy stuff. It's surprising to see, therefore, just how out of touch marketers are about the notion of being a dad in our culture.

According to the gift idea lists in Business Insider and The Huffington Post, I and millions of fathers like me are in desperate need of comfortable underwear, some sort of bygone-era hobby (brewing, barbering or surviving in the woods) and a drone of any kind. My hedonism should veer toward rare bourbon and cigars, while my whimsy should allow me to splurge on a vintage turntable, a bespoke suit or a statement watch. I, of course, have no interest whatsoever in this whitewash of stereotype, and honey, if you're reading this, please don't get me any of this stuff.

Interestingly, the work that our industry puts out into culture is steadily eroding the father stereotype as we seek to mirror the multicultural and single-sex families that we encounter everyday. In similar fashion, the now outdated stereotype of the stay-at-home mom has given way to the understanding that working moms make our kids and our society better off than before. So why hasn't culture tried to do the same with the father figure -- only in reverse?

I think it goes without saying that the stereotype of the American Dad is that he works hard in our culture. Very hard. He's harried but driven and always willing to go the extra mile and get back to the office. He remembers the conference calls but forgets the anniversaries. Often distracted with a client's problem, he's not really "there" at dinner or family events. He self-sacrifices to a detrimental effect, comforted just to know that "the family is taken care of" when he's gone.

This stereotype is perpetuated in the advertising industry, too. We really do work a lot. "If you're not in on Sunday don't bother coming in on Monday" was an often-used trope at a former agency. It produced great, ground-breaking and wildly culture-defining work. And that's why we work so hard. For that we are often away from home and up late at night. Moreover, the fluidity and dynamism of this industry makes fiscal predictability difficult, which can lead to stress and fear throughout an agency. And with ever-contracting budgets and timelines, we are used to doing more for less to win and keep business. So here I am a father, 17 years into the industry, writing about my own "father in the ad industry" stereotype.

It seems like this kind of guy would really need a $400 handcrafted fly-fishing rod to relax, right? He may want to get those rounds of golf in on Father's Day weekend or grill exotic meats on an authentic celebrity chef-approved grill. He may want to homebrew an IPA in the garage or get onto something and ride somewhere. My daughters got me a swanky hammock for my birthday, so what does that say about me?

Maybe it says that this stereotype could perhaps be out of date. That fathers today need to reconsider what it means to work hard. Or, what working hard at being a dad means for their careers.

According to Pew Research studies, more dads are taking on roles traditionally reserved for female stereotypes -- taking care of the kids, doing chores, earning less than the other spouse. Today, 7% of U.S. fathers with children in their household do not work outside the home; that's roughly 2 million dads. Although stay-at-home dads represent only a small fraction of all fathers, their share is up from 4% percent in 1989.

But even more telling is that, according to the latest research, "much of the increase in stay-at-home fathers can be attributed to more fathers caring for their family."

And that's what I want to say about Father's Day. It's not about us. We're a stereotype perpetuated by ourselves and for ourselves. It's about them. The family. The people waking you up on the third Sunday in June with breakfast in bed. The kids who incompetently wash your car once a year. The family that annually provides you with vibrantly colored and unquestionably comfortable underwear.

They don't see a stereotype. They just see a dad who is probably working too hard in an industry that holds on to an outdated metric of success. So this Father's Day, I'm going to go lie down in my overpriced hammock and ponder that a bit. And, maybe even take a nap. Maybe with one of my girls. They'll get all of me, which is what they deserve. Not a cardboard cutout of me, like the one poor Scarlett in this sweet spot from Hershey's had to create to free her dad from the confines of work. Here's to dads on Father's Day and every other day of the year and to employers in and out of the ad industry for recognizing the power of dads beyond the board room. 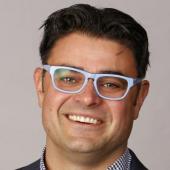 Max Lenderman
Max Lenderman is CEO of School, a Project: Worldwide agency based in Boulder, Colo.
Follow View all articles by this author