How to Build a Modern Creative Team in 2015

Eight Types of Creative Thinkers You Want to Have on Your Team
READ THIS NEXT
Opinion: Will Sorrell's exit help creativity regain center stage?

Generating big ideas that win at award shows and help ring the cash register can sometimes seem fortuitous, or a bit like lightning in a bottle. But to seasoned agency executives and their clients, they know their teams were purposeful and effective from the start.

What's the secret to building the modern creative team? Let's admit, it's not easy with technology changing every hour. And with new technologies come newfangled job titles, such as engagement artist, conversation architect and content archivist. But if we look well beyond titles on business cards, we're sure to help CMOs sleep better at night.

The What-if-er brings the big ideas to the table and brings the team along with him on the ride. He asks questions that persuade through involvement: "What if we…?"

Secret power: Helping everyone embrace the big idea, even though no one remembers who actually came up with it.

The Activator makes stuff happen. Good stuff. The Activator takes, "What if we…" and turns it into, "Here's how we could…"

Secret power: Turning the constraints of time and budget into two more impetuses toward creativity.

The Technologist knows what's possible -- and what might be possible if you just rejigger, reconfigure, work around or whatever. Knowing what's possible helps hatch big ideas, and your team is missing out if you wait to involve her until it's time to execute.

Secret power: You'll never know if you don't bring her in right at kickoff.

The Connector walks in your audience's shoes. They understand what people's needs are -- including how and where they interact with your platform.

Secret power: Seeing the big picture, then bringing it down to earth, to the level of human experience.

The yin to the What-if-er's yang. When the What-if-er says, "Let's reinvent the wheel," the Pragmatist says, "How about taking the wheel we've got and making it go where we want it to."

Big ideas call for great writing, not just to bring them to life during the execution phase, but also to capture and refine them during the concepting phase.

Secret power: A master of disguises, finding exactly the right personality and tone for every project.

Secret power: Creating images that prompt, "Yes! That's exactly what I was trying to say."

The CMO Thinker knows that the big idea is only as good as its results. She sees things from the CMO perspective: How can I sell this to my board or my CEO? Does it fit into the company's long-term plans?

Secret power: Disguising herself as just another member of the creative or account team -- but one who really gets it. 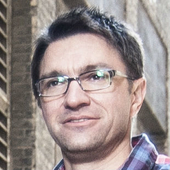