What Dr. Dre Can Teach Marketers About Storytelling

'Straight Outa Compton' Has Some Lessons for Brands
READ THIS NEXT
Opinion: Will Sorrell's exit help creativity regain center stage?

Forgot about Dr. Dre? I haven't.

That's because "Straight Outta Compton" is straight outta 2015, culturally relevant as ever, and Dr. Dre has reentered the mainstream after a 16-year hiatus from recording music and making films. In the process, Dre shows us all how authentic marketing is done -- telling a compelling story about his early career with N.W.A., while subtly referencing the aspects of his brand he wants us to care about. Don't call it a comeback. Call it the next episode.

"Straight Outta Compton" tells the story of how the rap group N.W.A. (Dre, Eazy-E, Ice Cube, Yella and MC Ren) pioneered a new genre of music in the mid-80s, Gangsta Rap, or as they called it, "Reality Rap." N.W.A.'s music depicted violent life on the streets of Compton in a way that no other artists had before. The group's success, as controversial as it was, coincided with escalating police brutality that led to Rodney King's beating and the L.A. riots of the early '90s.

It's impossible to ignore the similarities between those events and recent events related to racial inequality, making the film even more evocative. Dre and Cube have been talking about this stuff for years, and the film really couldn't have been released at a better time. Any good marketer will tell you, if you can say something in your own distinct voice and your message is timely, you'll be heard.

The storytelling of both N.W.A.'s rise and fall and the LAPD's controversies are complex. After all, this film was 13 years in the making. Dre, Ice Cube, and Eazy-E's widow Tomica Woods-Wright had a hand in producing it, and F. Gary Gray, a longtime friend of Dre and Cube's who is known for "The Italian Job" and "Friday," directed it. Involving these players and taking a lot of time to develop the story was imperative to making it powerful. It's the same strategy marketers have when trying to connect with an audience in a genuine way.

While the acting, writing and cinematography of "Straight Outta Compton" keeps the viewer engrossed, it does so while showing us just how cool Dre was and still is. Vivid, aesthetic shots of massive studio headphones and vinyl records are featured prominently throughout the film. A nod to Beats by Dre? Not far-fetched. And the classic black-and-white Adidas track suits that appeared throughout the film...Historically accurate? Yes. Natural product placement? Absolutely. These are just two examples of marketing that can be easily overlooked and acknowledge Dre's long-standing credibility.

Before "Straight Outta Compton" was even released, it had a genius social media marketing campaign that went viral. Users could turn their photos into memes, plastering on a recognizable "Straight Outta" label and typing in their location. Personalized marketing at its finest. Six million downloads later, even brands have tried to capitalize on it.

"Straight Outta" has had several high-profile promotional successes. When UFC champ Ronda Rousey knocked out Bethe Correia in 34 seconds on Aug. 1, the "Straight Outta Compton" label was right below her on the mat. The word "Compton" was painted over the skies of Los Angeles, adding to the hype of the film and Dre's new album. Even conservatives got to see Dre in his glory -- an ad for the film played during the first Republican presidential debate on Aug. 6, creating high visibility for the film.

Based on all of these marketing tactics, I'm not surprised that the film made more than $56 million its opening weekend and shattered industry records.

There's a reason Dre has been around for decades and is one of hip hop's wealthiest. He's always stayed true to his vision, leaving Death Row Records in 1996 due to creative differences with Suge Knight, despite the fact that it was taking off with Tupac Shakur. That move cost him some $50 million. But the loss didn't faze him; he pressed the reset button with his own label, Aftermath Entertainment. Dre's authenticity shines through in everything he does, including "Straight Outta" and its marketing.

Dre has his finger on the pulse of what people want before they know they want it, whether it was cultivating Eminem's talent or founding Beats by Dre, which captured 70% of the headphones market and was acquired for $3 billion by Apple. He's a leader, not a follower. As marketers, we should be striving for the same. 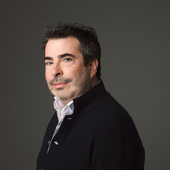