Disrupt or Be Disrupted: The Finance Industry Is Waking Up | Ad Age
Skip to main content
Sign In Register

Disrupt or Be Disrupted: The Finance Industry Is Waking Up

How FinTech Brands Are Revolutionizing the Market
READ THIS NEXT
You Can't Stop Instagram Bots by Looking. Brands Have to Stop Buying Them

Recently, a second bank in the UK was given the green light to build a bank on smartphones. Called Tandem, it follows in the footsteps of Atom, which was awarded a banking license this summer. The digital-only banks are mobile app-based banks with the promise of giving people more power and control over their money.

When Ross Anderson, Britain's leading expert on cybersecurity and professor of security engineering at the University of Cambridge, announced he would never bank online because of the fraud risks it carries, he was surely missing the point. It was like saying, "I never venture outside in the dark for fear of being mugged."

Technology is a driving force helping us reimagine our lives, which is exactly what the world of financial technology or "fintech" is doing. It is about navigating a new world where digital is reshaping customer behavior and enabling new experiences. If there are security issues, then security needs to catch up and not hold back what are clearly consumer needs and desires.

Just take a look at some of the following examples of how these fintech brands are attempting to revolutionize the market -- for the benefit of consumers:

1. Mark Mullen, CEO of Atom Bank, the UK's first digital-only lender, announced his ambitions to be "as disruptive to the banking industry as Uber has been to taxis," after Atom received a $68 million investment from Spain's BBVA.

2. Tandem Bank, the second digital-only lender to receive a banking license, claimed it will put customers' interests first by working with them as their partner in money. That will include helping customers avoid overdraft charges and missed payments, as well as finding the best loan and savings rates -- even if it is with another bank.

3. Monese is a startup that allows anyone to open bank accounts anywhere in Europe on their smartphones in as little as three minutes. Anyone in doubt that this is satisfying a potential customer need unsatisfied by the traditional banks need only look at its waiting list of 56,000 potential customers -- generated within one month of launch. The service is aimed at EU migrants. Instead of proof of address, a minimum opening balance or the provision that your salary be paid into the account, Monese lets users sign up for a new account from a mobile device in just a matter of minutes. ID verification takes place via selfie and a debit card arrives in the post. The only requirement is a registered address somewhere within the EU.

4. Polish mBank is not "just another" online bank. Its loan approvals take just 30 seconds, mortgage plans are discussed over Skype, and it offers only paperless statements.

5. Payoff is a digital finance platform that wants to apply the science behind online dating to personal finance. Payoff's chief scientist is the former eHarmony chief scientist Dr. Galen Backwater, the creator of the "love algorithm," who leads a team of top psychologists, decision scientists and neuroscientists applying science to help Payoff's customers better understand their financial behavior. By understanding their behavior and personalities better, Payoff can help its customers take steps to improve their financial decision making.

As well as retail banking, disruptors like Betterment and eToro have made inroads into investment banking, and cloud-based computing has revolutionized payments with ApplePay, Bitcoin and PayPal. What do these disruptive technologies that are reinventing the financial ecosystem have in common?

User needs: The ingenuity of these businesses lies in the simple fact that they are responding to unmet user needs in new ways -- needs unmet or ignored by traditional financial providers.

User experience: The finance sector disruptors are not using technology as a novelty or to simply play catch-up. They are using technology to put control and better, more appropriate solutions into the hands of their highly informed -- and needy -- audiences.

Data analytics: Technology is an enabler for the innovators and the disruptors, but it is also driving data analytics, which -- through optimization and clever algorithms -- are helping to transform the way this sector communicates and does business.

Personalized products: The disruptors in the finance industry are creating new solutions and partnerships with people who are behaving differently in order to function in the new world order. According to a recent McKinsey report, 2.5 billion adults don't use banks or microfinance institutions to save or borrow money -- this is about half of the world's adult population.

Through their elegant and revolutionary new services, these disruptive, innovative finance providers are creating financial inclusion for all as habits and behaviors continue to fragment and become more individual. Traditional banking needs to stop seeing us all as a mass of similar behaviors and needs. It also needs to stop seeing digital as just another channel for providing the same services that it has been offering for so long. Instead, it needs to adapt to a fragmented consumer universe that expects products and services that fit in with their modern, tech-enhanced life rather than the banks'.

And yes, while that may worry Ross Anderson, it is also the future that more and more people clearly want. 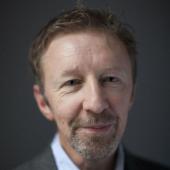