When I first became publisher of Ad Age, I worked with Marylee Keane and her team at the Effie Awards to create the GoodWorks Effie, to recognize marketers effectively using their platform for good. With great power comes great responsibility, and we, as marketers with powerful platforms, have the ability to use that power to further good in the world and help solve the multitude of challenges that face our nation and the world at large. The award was intended to highlight excellent examples of purpose-driven campaigns, so we collectively could have a greater impact.

This year, P&G's "Like a Girl," campaign for Always, was the sole winner in the GoodWorks Brand category, where it took home the silver Effie. (The campaign also won gold in other categories.) "Like a Girl" has received close to 58 million views on YouTube since it debuted last summer and has been lauded by many for its insight and impact.

The fact that this campaign is the only winner in the GoodWorks Brand category is noteworthy given how many brands are pursuing purpose-based initiatives. Perhaps it means these efforts will face greater scrutiny as more programs enter the market. This is a good thing, however, and even under this filter "Like a Girl" clearly stood out.

As my friend and colleague Ken Wheaton said of "Like a Girl" in an Ad Age column, "It's an eye-opener -- which is something you don't often get in advertising of any kind. It made me -- a 21st century, non-PC male born and raised in the South -- reconsider my own word choices." Ken was not alone and, given the state of women's issues in the U.S. and around the world, this campaign is worth celebrating and learning from.

Last month at Internet Week, Chelsea Clinton shared the startling results of the Clinton Foundation's No Ceilings research. Among the findings: one woman in Yemen is valued at half a man and 100 countries around the world still have restrictions on women's rights. We still have plenty to do in the U.S. as well. The U.S. is the only developed country that does not to mandate paid time off for mothers. The list of travesties goes on and on.

With so much work to be done, there are plenty of reasons for brands to begin creating and pursuing purpose as part of their communication efforts. As brands of all kinds jump on the purpose bandwagon, driven by a desire to make a difference and profit, there is a risk of creating campaigns that feel inauthentic. If these initiatives are simply veiled sales pitches, we lose our power to make a difference, and what a waste that would be. Sadly, all it will take are a few misguided initiatives.

So what can we learn from "Like a Girl", and why has it worked so well? I asked a few experts to share their insights on what makes a good purpose-based campaign:

Own Your Insight
Always identified its own insight rather than borrowing equity from a non-profit partner. Many brands choose to partner with charitable organizations and borrow their equity, rather than creating a purpose of their own. Instead, Always established its unique perspective, then partnered with respected groups like UNESCO, Lean In and Girl Scouts of America to amplify its message.

With the "Like a Girl" campaign, "P&G decided to stand behind a powerful insight -- that girls self-esteem is deeply eroded at puberty and can lead to debilitating issues later in life -- and make a stand on that insight alone," said Max Lenderman, CEO, School. "It made its own cause; it didn't need to borrow one. That is a fundamental marker of having purpose: it should be born by the brand, not adopted by it."

Make It Sustainable
Rob Holzer, founder and CEO of Matter Unlimited, warns against marketers overstating their purpose. "They go out and create a whizbang campaign, but if they haven't done their homework or messaging underneath it, they can get caught out," he said.

"Like a Girl" appears to be a program that has both staying power and depth. Always has invested in puberty education since the brand launched 30 years ago, but this campaign gives that effort new life. In March, Always celebrated International Women's Day by releasing new findings from its Always Puberty & Confidence Wave II Study and creating a new video showing how girls are adding their own spin to this message and placing new meaning on the phrase "Like a Girl."

Use Unexpected Media Placements
"Like a Girl" quickly went viral when it launched last summer, but it was the placement during the Super Bowl six months later that made the biggest statement. It simultaneously silenced all the men and women sitting around the television at my house -- and many others -- while creating an overwhelming conversation about the words we use and how they can undermine how women and girls are treated. Not all media budgets can afford a Super Bowl placement. However, budget aside, Always used an unexpected placement to make a statement.

This campaign has effectively set Always apart, as any Effie winner should, while simultaneously accomplishing something much more than that. It is changing behaviors and making us pause to consider the power of our words. For that reason, I am thrilled "Like A Girl" is this year's Goodworks winner. I look forward to seeing many more programs like it in the future. Congratulations to P&G's Always and the team at Leo Burnett Chicago, Toronto and London, as well as MSL Group and Starcom Mediavest Group for the campaign and this well-deserved victory. 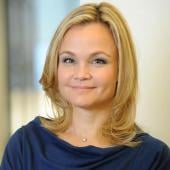