No one cares what you have to say. We go into every assignment thinking this. It's true. No one gives a shit. People are busy, they have a million voices yelling a million things at them every day, and they don't care about what we, or our clients, have to say. I know it sucks, but that's the way it is. Smart people pay us to make people care. And if we're good, we have the ability to make them pause. We are here to grab people's attention and get them to take action. So are you ready?

You've got to find an enemy.

Ever since humans started telling stories, those stories -- the ones worth hearing and sharing -- were built on tension. They are driven by a protagonist and an antagonist. Something to root for and something to root against. Without that enemy, you've got nada. No story. Nothing. Tension makes people pay attention.

Today, we are more in the entertainment business than the advertising business. We are competing with the internet and all new forms of content. But that doesn't mean we throw away the basic fundamentals of telling a story. When you think of the greatest marketing of all time, what do you think of? "Just Do It?" "The Truth" campaign? "Small Business Saturday?" The great Dove work? #Throwlikeagirl? It's all great, iconic, award-winning advertising -- and it's all storytelling. It's not a new thing -- it's just the popular buzzword.

"Hilltop" by Coca-Cola is still one of the best stories ever told by a brand. In fact, Coca-Cola is still telling that story with "Open Happiness." The most famous and iconic work uses tension. "Hilltop" used culture. 1971 was an awful time: race riots, ecology going to shit, Vietnam raging, women looked upon as unequal. The people who created this masterpiece pushed against culture and made us all stop and pay attention. Imagine a little bottle of Coke changing the world. Thank you Harvey Gabor and Bill Backer for teaching us that art needs resistance.

Now think of Apple. Did you ever see that picture of Steve Jobs giving the finger to IBM? No? You should, because that is the story of Apple. Not just the 1984 commercial, but the whole company. Why did we all fall in love with Apple? Because Steve told us who and what his antagonist was and we bought it. Because we believed it: "The computer for the rest of us." It was truth.

Clearly, all of these brands found their enemy, which led to great storytelling. But even more importantly, that enemy and that storytelling led to sales, margin improvement and market-share gains, which is ultimately the goal.

Why does 90% of advertising fail?

Because people in marketing are generally too scared to be provocative -- spending lots of money saying things nobody cares about. Testing their way to find the truth. It doesn't work. Ask Pixar. They never test anything. They just create great stories. They know how, and they have confidence in themselves to go forth. The best marketers I have ever worked with act like this. They use their brains and their guts. Why ask people for the answer? That gives you vanilla. There's no engagement in the middle, trying to please the masses. No one cares about how great you think your product is. A brand's story isn't about how great it is. That's not interesting.

A brand's story, like the people we admire, is all about what it stands for. Heaven needed hell. Imagine the Bible without hell. There's no story there without it. Imagine "Jaws" without the shark. Or "Star Wars" without Darth Vader. Crappy, right? So why is marketing any different? We need to provide people with two sides of the story. In some ways, our brains need this polarity. I say black. You say white. No one says gray. That's the way our brains work. It's how we are wired. It's cognitive. We can't change it. And why would we? It's awesome.

An enemy is a great motivator for creativity and teamwork. In the same way sports fans come together to root against a rival team, an enemy also galvanizes a brand team. It gives them all a common thing to push against. With that tension acting as a jumping-off point for their thinking, the team will return with solutions that make sense and get attention. The strategy is the idea. Make the strategic box smaller and tighter, find the enemy, and see how much more creative work your teams will generate.

Does this mindset sometimes freak clients and agencies out? Yes. That's because it rejects that safe, boring middle ground so many brands feel most comfortable in. Your enemy is your best friend and it can make your work actually great. Figure out who or what it is, get it in your crosshairs and get to work. You'll make something great. 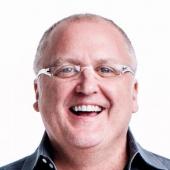 Pete Favat
Pete Favat is North American Chief Creative Officer at Deutsch and previously co-created of the Truth campaign at Arnold Worldwide.
Follow View all articles by this author