READ THIS NEXT
You Can't Stop Instagram Bots by Looking. Brands Have to Stop Buying Them
An old Apple ad promoted the Shazam app -- early days in the audio-recognition game.
Credit: Apple

Much has been written about the popularity and surging sales of the Google Home and Amazon Echo, two of the first, but certainly not last, voice-enabled home assistants. Although the products are still very young, it's not hard to see how this space will scale and gain more popularity and functional value, especially now that 3rd party developers can build products that connect to the platform.

Nevertheless, 69% of some 7,000 Alexa "skills" apps have one or no customer reviews, according to VoiceLabs, an analytics company for Alexa and Google Assistant app developers.

On the Google Assistant platform, there's only a 3% chance that a downloaded app will be active by the second week, VoiceLabs says.

While these stats look alarming on the surface, we need only to look to Apple and its App Store, the original app store at scale, to see that a rocky start is not uncommon.

In the early days of the App Store, there was tons of excitement, speculation and hype. There were also similar stats and stories about app quality and the revenue model, as well as questions about whether the dev community could create useful and sustainable apps, let alone businesses. The Apple App Store went from 500 apps at launch to more than 2.2 million today. The app economy was recently touted for creating more than 1.5 million jobs. Pretty incredible.

More importantly, Apple nurtured the process. It worked closely with early app developers, featured them in advertising, and focused those ads completely on utility, function and consumer benefit. Apple also did an amazing job keeping close tabs on apps being launched, and featured the absolute strongest examples of how software compliments hardware, always tying it back to their product, the iPhone.

One of the strongest examples of this is Shazam, a music identification app that magically lets you know what that really cool song is you just heard during a commercial. This was among the first apps that caused a major stir with people of all ages. It was simple, clever and solved an actual problem. It was a great example of app developers creating something very complex that appeared, to the consumer, very simple. All Apple had to do was feature it in a quick, 30-second spot, and Shazam was one of the earliest breakaway App Store success stories. The ad is perfect. It showcases the product and ties the consumer benefits back to the iPhone. Everyone wins.

Brands, startups and marketers have a lot to accomplish in the early days of voice computing. Yes, asking your Echo or Google Home to tell you the weather, play music, order you an Uber, or give you the latest news is cool, but these are the most obvious and literal use cases. The next batch of apps and 'skills' will go one step deeper, until someone (very soon, I predict) has that "shazam" moment that ushers in and influences the entire space. It will be an idea or a utility where the marriage of hardware and software is truly special.

How will brands act on this? What should they be thinking about? Voice-enablement is yet another new layer for branding, just like social, digital, or any other new communications medium. Learning from the maturation we've seen in those spaces, we know there will be an initial gut reaction brands and developers will take, and that they'll create obvious applications or target low-hanging-fruit needs.

Avoid this. Thinking like this resulted in thousands of useless apps that lived and died very quickly. Longer lasting products have tapped into some basic utility that, when applied to the technology, made life better in some way. While some would argue Tinder made the world a little worse, it has all the hallmarks of a utility that solves a distinct problem -- figuring out if a potential mate finds you physically attractive enough to start a conversation -- in a simple way.

Don't come up with a voice idea. Instead, come up with an idea rooted in a problem that is best solved through voice. Whether you work in automotive, financial services, CPG, hospitality, healthcare, or publishing, by getting into this space there are endless opportunities to diversify your brand, to create more value for your audience.

In the near future, when someone asks a device in the kitchen how much milk to add, or when someone asks a device in the bathroom if they should use bactine or peroxide on their kid's cut, your brand should be there. Finding your Shazam moment will mean coming to the table unencumbered by the urge to do what's easy, and instead setting out to solve a problem or provide a utility that your brand can own. 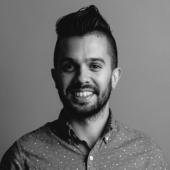 John Sampogna
John Sampogna is co-CEO and founding partner at Wondersauce.
View all articles by this author