Brands, Talk With People -- Not to Them

Ad Campaigns by Rhode Island and Sweden Show What Works and What Doesn't
READ THIS NEXT
Opinion: Will Sorrell's exit help creativity regain center stage?

We live in a time when people just don't trust government, whether it is federal, state or foreign. So what do people trust? They trust each other. Before they buy something on Amazon, or rent something on Airbnb, they look to see what other people think.

So at a time when people have zero trust in government, what is a country like Sweden or a state like Rhode Island supposed to do to attract tourism and new biz? Recently, The New York Times ran separate stories about marketing campaigns for both those places; one campaign was brilliant and the other, not so much.

First, the not-so-much one.

The State of Rhode Island spent a good deal of time and treasure coming up with a new marketing campaign. The advertising slogan they birthed was "Rhode Island: Cooler and Warmer." It was supposed to mean that the state was way cooler than you might think and the people were friendlier than a typical frosty New Englander. But within days of unveiling the campaign, the state's chief marketing officer was forced to resign and the new governor was reported to have had the "worst week of her governorship."

To be fair to the Ocean State, they aren't alone in the tourism faux pas department. They join "Visit Nebraska, Visit Nice;" "St. Lou Is All Within Reach;" "Be in Berlin;" "Buffalo. For Real;" and my favorite bad slogan, the one for Hooker, Oklahoma: "Hooker. It's a location. Not a vocation."

So what's the mistake all these municipalities are making?

Well, the second Times story had the answer. The Swedish Tourism agency set up a phone number that connects international callers to randomly selected Swedish volunteers to chat about whatever is on their minds. The idea being that they will make a connection with a real life Swede and learn something new and want to visit.

Brilliant! Instead of coming up with a corny advertising slogan like "The Swedest Place on Earth" and talking to people about how cool they were, they chose the route of talking with people -- using real people to do it.

I once suggested a very similar idea to a client of ours, one of the 30 largest cities in the U.S. with an even larger identity issue. They didn't buy it because they didn't get it. They didn't understand that people wanted to hear from other people, not some tool from the Department of Tourism.

I've been fighting for simplicity my entire life and what I've learned is that you can't have simplicity without humanity. When you make something simple, what you are doing is making it easy for me to like you, to make a real connection with you. That's it. It's that simple. The folks who came up with "Calling Sweden" instinctively knew that. 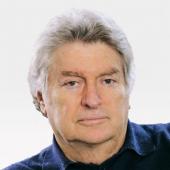