Resilience Is the No. 1 Characteristic That Will Define Success
READ THIS NEXT
Opinion: Will Sorrell's exit help creativity regain center stage?

Earlier this year, I gave a presentation to students at the VCU Brandcenter at Virginia Commonwealth University. Typically the speaker offers industry insights and tips for getting ahead, along with reflections on personal accomplishments, while showing a "best of" reel demonstrating how great ideas, cleverly executed, can ignite careers, shift culture and maybe even win some awards.

I can understand why one might feel obliged to stoke idealistic aspirations and motivate students to aim high in a profession where the best talent is often celebrated. But as I began ruminating on life and advertising, I couldn't help but think about how, as one ages from 25 to 50, advertising becomes a steep pyramid, and people fall off in droves. It's not necessarily because their talent dims or because they lose their ability to think critically or because they can no longer connect with young consumers. It's because, for all the psychic highs an agency career can bestow, it comes with a tremendous amount of wear and frustration. Much of your best thinking and a lot of blood, sweat and tears end up on the proverbial cutting-room floor.

So I skipped the stroll down memory lane in favor of some tough love born from experience. My basic premise: Most people getting into this business are unprepared for the level of disappointment and rejection they're going to encounter, even at the best of creative agencies. Why is it so crucial for students to know this? Because resilience, and the ability to cope with disappointment, is the single most defining characteristic that will determine their success. It's more important than creative ability (which, at the best agencies, everyone has). It's more important than being politically adept.

Go in knowing it's going to be hard.

That's the secret. And it's ok. There's going to be some pain, some rejection, some fear. We're human. It doesn't mean it isn't going to be fun, exciting and triumphant, too.

But those who become jaded and negative, in my experience, have a hard time accepting that there's going to be some serious gut-checking in the course of this business. Young professionals continually seem surprised at how much emotional and physical energy it takes to be resilient -- creating under pressure, in a box, with little time and high expectations. That is why we get paid. That's the "job" part of creativity.

You might be tempted to think that "being resilient" is something you either have or you don't. It's not -- it's a decision. Everyone who's had long-term success in advertising has made that decision.

Years ago, as a writer at Wieden & Kennedy working on a new campaign, I was nervous (because the current campaign had been successful) and excited (because Spike Jonze had agreed to delay shooting "Being John Malkovich" for three weeks to shoot our stuff, probably inflating our sense of how good the work was). Just as we were about to hit the "go" button, we had one final meeting. A client, who was a stranger to me, entered the picture after months of work and pulled the plug. "Why are we doing this campaign?" he inquired. "We have a successful campaign. Why change course now?" After all the work, revisions and more revisions it was over in one 10-minute conference call.

Though not my first disappointment, it still felt like an immense and staggering blow -- one that anyone in the business, for any amount of time, would recognize as an unfortunate but completely common experience. And one I had to decide if I could face over and over again.

Because of the high strikeout percentage in advertising, you have to take joy in the process. This is what you need to love: the thinking, the writing, the comps, the coding, the production, the laughing, the stupidity, the presenting and the late nights. And maybe most importantly, you have to find those with whom you enjoy taking the ride.

With the benefit of hindsight, the inordinate amount of value we place on making advertising can seem pretty silly. I don't care how good it is. It's not a spouse, a child or a mom.

Nonetheless, I get it. It's your job and you want to be great at it -- you should. Especially when you're starting out. That is the time to be a bit unbalanced, maybe care too much, try too hard and give too much to your career.

Just remember, you're going to have plenty of chances to keep making the decision to be resilient. 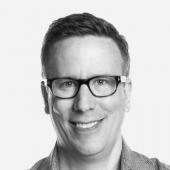