The Tough Reality Facing an Advertising Mother of the Year

That's the sound of the U-Haul backing up in my driveway with my Mother of the Year award. A running joke between my older sister and me when one of us has had a particularly bad mothering moment. All it takes is those three beeps to bring us comic relief and levity to the challenges, frustrations and guilt of being a working mom.

Advertising Women of New York (AWNY) and Working Mother Magazine (WMM) select 20 women/mothers working in advertising to honor every year. I was honored to be chosen along with 19 other kickass, hardworking women in advertising this year. Just the fact that I was nominated means my agency, DDB, believes in me and respects what it takes to be a mom in a creative leadership role. Long hours, weekends, extensive travel -- and the fact that only 11% of creative directors are women. I was flattered and touched by the outpouring of congratulations, love and respect from colleagues past and present.

But it was a bittersweet win. I felt like a fraud. Ashamed.

How could I accept my Advertising Working Mother of the Year award when I felt I had truly failed as a mother? I had failed my eldest daughter. After an incredibly emotional year witnessing her battle with severe depression, anxiety, self-harm, substance abuse, bulimia and hopelessness, we made the heartbreaking decision to put her into a therapeutic residential program. By far the hardest thing I've ever done. Ever.

I felt I had failed as a mother because I could not keep my daughter safe at home. Failed because despite my best efforts, I did not raise her with enough self-esteem to love herself and her body, despite what society, the media or some ignorant 15-year-old bullies told her. Failed because I had to put her well-being -- her life -- into the hands of those better equipped. I had to send her away.

We live in a world where it's OK to be almost anything except mentally ill. Mental illness is seen as a weakness -- a choice to not be happy. But my daughter is sick with a devastating, life-threatening illness. Ultimately, I did whatever a mother or parent could do to keep her child alive. Unfortunately, in this case, that meant sending her away and handing her over to professionals.

My father is bipolar. I grew up with the stigma of mental illness and saw firsthand the bias of people's perception of his battle. I asked my daughter's permission to talk about her ongoing struggle with manic-depression and she wholeheartedly agreed. I believe as marketers and content makers, we have the ability to make a difference, help normalize and de-stigmatize, help save lives.

As content creators, we can make a difference. How we cast roles, the concepts we approve and how much we alter our images will make a difference. We need strong voices like those of Miss Representation to shine a light on the harmful effect of the male gaze as well as #truthinads to call bullshit and, if not to stop photoshopping, at least slow down the abuse. We need initiatives like Kat Gordon's 3 Percent Conference to help change the ratio of male to female creative leaders in the advertising industry to ultimately change the status quo and provide a female perspective to advertising communications. And let's not forget the kickass Cindy Gallop of "Make Love Not Porn" fame, who is trying to evolve a generation's distorted view of sex. Cindy is a champion of empowering women to say what they think and call people out when it comes to gender inequality in the ad world.

I recently received a letter from my sensitive, smart, creative, beautiful 15-year-old daughter, and in it she thanked me for all I had done. Thanked me for the treatments we had explored, for all the inpatient and outpatient programs and various therapists and therapies we tried. But most importantly, she thanked me for saving her life. So despite my guilt, or better yet shame, maybe I did something right. Maybe I'm not such a terrible mother after all.

My sister's response when I told her I was selected as one of the Advertising Working Mothers of the Year was to acknowledge that the honor was indeed bittersweet. Her advice? Take a moment to revel in your awesomeness and accept the acknowledgement by your peers, knowing full well your struggle is real, but move through it, nourish your creative soul and pave the wave for others, because that is your true reward.

To all the working mothers out there who struggle to find balance (you know who you are), please be kind to yourselves. No one judges you more harshly than you judge yourself. You are awesome. Revel in it. 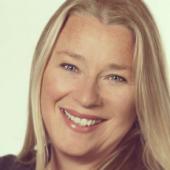