READ THIS NEXT
AT&T's mashup cinema campaign gets more extreme

Last year, BBH account planner Mary Tomer launched Mrs-O.org with BBH's entrepreunerial arm, Zag. The popular site, which has followers from 200+ countries, chronicles the First Lady's democratic fashion choices that range from high end designers to styles found at the more purse-friendly Target or J.Crew. This week, Tomer and Zag released a book based on the blog, Mrs. O: The Face of Fashion Democracy, published out of Hachette imprint Center Street. Tomer tells Creativity about how she and Zag made the blog, and now the book, a reality.

For those who aren't already familiar with it, can you please tell us the story behind the launch of the Mrs. O website?

I was following Michelle Obama's style throughout 2008 - intrigued by the high-low mix, the combination of strength and femininity, and the new designer names emerging - but it was during the DNC in August that I went from interested to absolutely captivated. With each night of the DNC, my curiosity grew. One night I Googled, wanting to learn more about the designers that Michelle Obama was wearing, and to find a place to share my enthusiasm with others. I was looking for a blog like Mrs-O.org and when it didn't turn up, I decided I start it.

My natural inclination was to take the idea to BBH to see if they would help. I honestly never thought twice about this. I wanted the blog to be as stylish and polished as its inspiration and who better to ask? I've worked at BBH since 2005 and have tremendous respect for the creative integrity of the company. I knew there was an appetite for embracing new forms of creativity, and a fundamental respect for a good idea, regardless of its scale or source. I pitched the idea to Ben Malbon, former head of Zag, now running BBH Labs, and then to CCO Kevin Roddy. They both said yes, and Mrs-O.org was off and running. 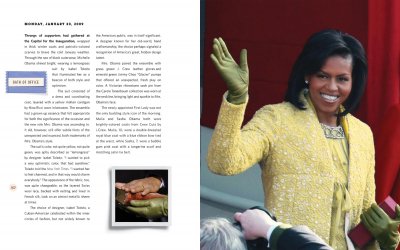 What inspired you to create a book version?

The week following the election, less than two months after the blog had launched, I was approached by a publisher who emailed me through Mrs-O.org. Through that offer, I connected with a literary agent and wrote a book proposal, all in a matter of a few days. We ultimately didn't move forward with the first publisher, but soon connected with Hachette/Center Street a few weeks later, who would end up being the perfect partner for the book. Sure, the potential for the blog to turn into a book was a bit of a pipe dream, but it was incredibly surreal that it became a reality so soon after the blog had launched. I didn't tell many people or did so with caution for many months. I couldn't believe that it was all actually happening, and in some ways, still can't!

Tell us about the making of the book. What were the various steps that went into producing it?

The process officially began in January and concluded in late June. Many things happened in parallel. One of the first things we did was begin to meet with book designers. Travis Quinn, the head of art buying, was instrumental in this. In a week's time, we met with at least 15 designers. We were thrilled to get Rodrigo Corral Design on board. We fell in love with Rodrigo's work after seeing his design for Influence by Mary Kate and Ashley Olsen. At the same time, I was writing a more detailed outline, and culling the looks I wanted to feature in the book. Around this time we got an excellent freelance photo researcher on board, Molly Dowd, who began that piece of the process. Next we set out to interview the first lady's key designers. The interviews, for the most part, were conducted in April 2009. I subsequently spent May and June voraciously writing, as we had a 35,000 word deliverable. Once all of the content was in the book, Sarah Dien, a print producer at BBH, led the process of final proofing. 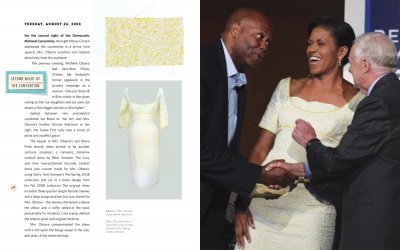 And now about the content. Who did the illustrations? What went into your illustrator choices?

The cover illustration was done by Ben Wiseman, an amazing young talent out of Parsons, who was working at Rodrigo Corral Design. The illustrations in Chapter 9, opposite quotes submitted by site readers, were done by Elisabeth Moch, Jean-Philippe Delhomme, Francois Berthoud, Minni Havas, Mia Overgaard, Virginia Johnson, Carter Kustera, Stephen Campbell, Sirichai and David Downton. With Travis Quinn's help, we approached both legends and rising stars in the world of illustration - a mix much like Mrs. O's range of fashion designers. We wanted to compile a diverse, robust range of illustrations that would close the book on a high note.

You feature interviews with some of Michelle Obama's designers. How hard was it to get them board for this? Anything interesting about this process?
Through my blogging on Mrs-O.org, I had begun to develop relationships with press representatives for certain designers, which got my foot in the door for the interviews. But truthfully, this part of the process was a lot of work. I wrote letters, sent emails, made phone calls, went to fashion parties, whatever it took. I didn't give up when someone said "no" and they did, many times. Ben Jenkins, the strategic director of Zag, was an amazing source of encouragement throughout this.

And then we began to see somewhat of a domino effect take shape. As more designers got on board, so would their peers. In the end, we secured nearly every interview we set out to. The book includes Q&As with top American designers very closely linked to Michelle Obama's wardrobe, including Isabel Toledo, Jason Wu, Thakoon, Michael Kors, Peter Soronen, Maria Cornejo, Jenna Lyons and others. There are also original quotes from Narciso Rodriguez, Sonia Rykiel, Rossella Jardini, Diane von Furstenberg and more.

The preview video mentions that there are various new photographs in the book. Who did you get to shoot, and how did you get access to all the goods?
The original photography is of clothes, shoes and jewelry of styles worn by Michelle Obama, sourced from the archives of the various designers interviewed. We were receiving one of a kind archive pieces from all over the world - New York, of course, but also Chicago, Los Angeles, Paris, Milan, Tokyo and Stockholm. The still life photography of these pieces captures detail that hasn't been seen before, adding rich new dimension to the book. (The inspiration came, in part, from The Metropolitan Museum's Jacqueline Kennedy: The White House Years, one of my all time, most cherished books.)

Was Mrs. O herself involved in any way in the book? Did you get a chance to talk to her about this?
When I started the project, I wrote a letter to the first lady and her press office to tell them about the project and to request an interview?a long shot, but I had to try. In early June I received a letter back from Tyler Lechtenberg, the Associate Director of Correspondence for the Office of the First Lady, thanking me for my letter but declining the request. The book is dedicated to Michelle Obama and I plan to send her a copy. I would absolutely love the opportunity to meet her.

Did you work with any outside publishers? Were there any difficulties in the actual publishing/printing of the book?
The book is published by Center Street, an imprint of Hachette Book Group. From what I observed, the print production process did not seem not hugely different than that for advertising, except for the scope - 250 pages at a time. 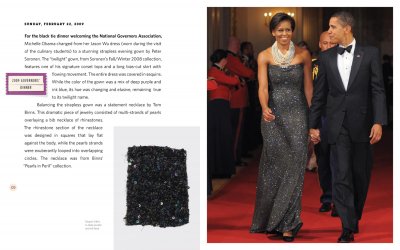 Overall, what was your biggest challenge in putting the book together? Would you do anything differently if you had to start all over again?
This book is the result of a lot of hard work by an incredible group and number of people. There are two double page spreads of acknowledgements and credits. At the start, I'm not sure I fully realized what went into creating a book like this, but perhaps that was a blessing in disguise. There were times that it felt very grueling. There was more than one night that I saw the sun rise as I typed away on my laptop or edited pages, but it was all well worth it. It was a once in a lifetime experience and I honestly wouldn't change a thing.