The latest from director Fredrik Bond may be for teenage boys what Honda "Cog" was for car buffs, featuring two lads cast via MySpace and a tortoise going through an improbably smooth morning ritual. As you may imagine, the effortless look took quite a bit of work to nail. We got caught up with Bond while he was in sunny Los Angeles recently to hear his sordid tale of circus trainers, exhausted non-actors and mind-crushing tedium.

How did the casting work? The agency cast people from MySpace to come up with examples of simplification?

Basically we just wanted to work all the way through in an effortless way, so the decision was to cast people off MySpace and find the music on MySpace, and then live with it and die with it. So we were looking for a talent that was submitting into the MySpace page, people had their clips that they posted on MySpace and we got in touch with them about getting in to a casting session where we would brief them on what the idea was and then they had like a week to practice the choreography at home. So we took it step by step. When that bunch came back we decided this guy looked like he could crack it, so we narrowed it down to, I think in the end, three guys it was between, and we finally decided on Sam. So it was a pretty interesting way of working.

Sam practices his most difficult trick
And then parts of Sam's video were incorporated into the main spot, yes?

Was there a technical person that could help him do those tricks, and engineer the set so it would respond correctly to his actions?

That was my job, to find ways for him to be able to do these tricks. We brought in a drill sergeant that would just sit into the late, late hours, when we had to work in shifts, but for most of it, all the tricks we collaboratively worked out together. That was my directing job, on this particular occasion to come up with solutions on how he could go from one side to another. So in some instances we had to use the help of some wires in getting things coordinated, because it was a very, very tough task for [Sam].

Had you decided on using wires or rigs originally or did you figure that out after 100 tries?

We came to that extremely late in the process. Some places, we just felt like we tried it out thousands of times. Seriously; it was a very, very thorough process. We just realized that some places it was impossible for it to come to a certain mark. We had to have the help of some choreography rigs, but very minimal.

When you're arranging these different tricks to happen, do you think about the viewer who's going to be able to rewind and pause and play at home and say 'this is how they did that?'

The way we felt about seeing the little virals that the guys put on YouTube, it was a challenge, they started to challenge each other. We felt like the bottom line is it needed to feel effortless, that was our goal with every trick he was doing; it was something that he was going to be able to do without feeling too contrived. I think just by the nature of it, we wanted to have a level on the tricks where you would pick up the challenge yourself and try. Stupid things you might want to do at home, especially at that age when you don't have anything else to do. Later in life when you have too much work, you tend to stop doing those stupid things that just burn time. But at a certain time, sometime in life, in your dorm, you have a lot of time on your hands. So some of the tricks we felt were going to be catchier than others.

Did you look at those catchier tricks from the perspective of making them technically flawless as opposed to others you might fix with VFX?

It just grew on us, we tried a bunch of different things, everything from ropes that he had to sling, from tennis balls, we just tried everything that we could possibly think of; we had two or three weeks of just total brainstorming, where they brought in their virals and were trying things at home to us trying things ourselves, and then bringing in the actor and just trying out stuff. We didn't want to put too much intellectual thought behind it, it was more about what felt most true to the idea about being effortless. The absolutely trickiest one was the toast. That was a nightmare. That toast, that he slides into his mouth, in the end, because it was so late down the line, among all the tricks that he'd done, he was pretty exhausted at that time. So that was like, oh, my God; that was the one I tore my hair the most. I think it looks like the easiest one. When the camera started to roll, I think we did at least 180-200 takes. 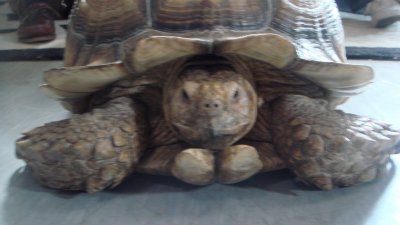 The most patient cast member
But all the individual movements had been broken down and mastered by Sam individually?

He had already practiced them, but we realized that, after three weeks of rehearsing, we had to start to get the camera rolling, because it's just a total fluke when he gets everything going. He's not going to be able to repeat that ever again. But it was fun, in the end, I must say.

Did the kid realize what he was getting himself into?

I don't think he had any idea. He was a really nice guy, but also he's an artist in his own right so I think he was struggling with being told exactly what to do. But he was great; he really did a great job. I think it was more on the late, late hours of rehearsing where he was like 'why do I have to do this'. But when he finally did it he was like 'wow, now I know why we went through this.'

You mentioned a drill sergeant earlier; someone had to come in to whip him into shape?

For a short time there was a guy who came in every now and then, he was, I think he was a circus trainer. He came in to work a little bit on the synchronicity of things. He was a pretty mean ass guy. He came in and he didn't have his silk gloves on. We kind of had to let him go after a while because he went a little bit hard on the guy.

So you were the good cop and he was the bad cop?

You've worked with amateur talent in the past, with that Starbucks manager in "Gator."

It's always a bit scary, because you tap into one thing that they're really good at, which is most of the time when you're on set, you find something like 'oh, bloody hell, what if we do it this way' but you can't try something when somebody's spoiled the moment, you have to kind of work around them. But if you get it right, you get that spontaneity which is hard to get out of actors. That feels extremely truthful. When it works, it is very rewarding. This guy was somebody who has never done something like this or been in front of a camera before, so I think it really helped us to get the low-tech feel of it.

What's exciting in your life right now? What do you finding interesting at the moment?

I'm just trying to listen to as much music as I can, I saw The Assassination of Jesse James last night and that fucking blew me away, it was amazing. For me, it's everything. It's never something that's just one thing. It's a very nice time right now. I get a big kick of out of my company, Sonny London. We're doing small little short films on the Internet, we really want to be a place where directors can really try their creativity and feel like they have the support from other directors. Speaking to other 'fire souls,' I call them, like kindred spirits, is inspiring. I'm having great fun doing that, because I speak to my guys every day, we're sending small virals to each other that we shot, we show cuts to each other, that's really inspiring. Because like at the circus, the clown is the saddest person, I think sometimes directors feel like the loneliest guys on the planet, struggling with their ideas. When we're able to share things and share with people that are respectful and know how important an idea or an atmosphere is, you feel like they're treating it equally respectfully and it's so rewarding. You can get insights and swap POV like that. It's invaluable. We just got Vaughan Arnell [formerly of Blink] in and he's amazing. I'm really looking forward to getting to do some great work. He's amazing in the amount of ideas he has, and his energy. He's great. So that's what I get inspired by, in addition to everything else.

To discuss this article, visit the Creativity Forums.