Budgen, BBDO on Track with Monster

A mere three and a half months after winning the account from Boston's Brand Content, BBDO, New York is releasing its first work for Monster—two spots, "Slots" and "Daybreak," directed by Gorgeous' Frank Budgen and MJZ's Nicolai Fuglsig.

Daybreak portrays a village, or more likely a suburb, filled with discontented workers, who, as the dawn creeps up, man the city's Eastern ridge to make a futile attempt to repel the daylight. "Slots" shows drones moving about a city on rails, with one daring bemulleted freethinker busting out of his prison and making his way around the rat racers.

The new spots are part of the global "Your Calling Is Calling" campaign, which will also include radio, print and online work as well as two additional spots—"Good Fit" and "Stork" were shot by another MJZ director, Rupert Saunders and Danny Kleinman of Rattling Stick.

The strategy is aimed at pitching Monster as the resource to help attain your most life-affirming career. Each TV spot is different, in visuals and in message, and reflects the sensibility of the directors involved.

"I think out of the whole thing the most amazing [part] was the caliber of directors," says art director Jerome Marucci. "As luck would have it all of our top choices were available." The remainder of the four spots, titled 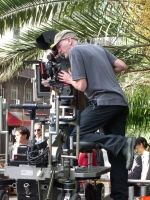 Budgen at work
The first two spots are timed to coincide with the existential dilemmas many face around the new year, and despite Monster's prior presence ("When I Grow Up," "Soulmates," "I Feel Love") in the Super Bowl none of the four were made expressly for the February 2 game.

"Slots" was shot in Buenos Aires, with actors actually on rails with feet encased in Budgen-devised pods. "They actually pulled them through on cables, it was challenging for the talent to keep their balance," says copywriter Grant Smith. "They weren't in the track they were on it, but we actually had no mishaps." The creatives say the director's desire to get as much in camera as possible led to the development of the rail system and locked-in feet with mere touch-ups in postproduction. 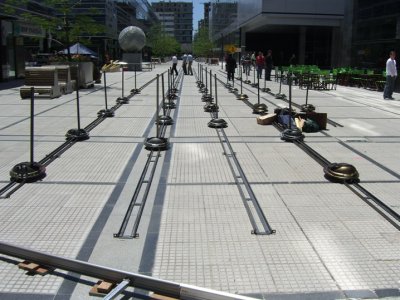 You wouldn't have much impetus to get out of the daily slog either if you had one of those up your bum, now would you?
"[Budgen] loves to have all his options," says art director Rick Ardito. "You do surrender a lot of American agency control when you work with Frank, but his interests are the same as the client's and ours," namely a superb end product.

"Those foot pods came out of Frank wanting a more restrictive element," says Ardito. "Then we could get to the core idea faster." Ardito says Budgen's input helped the creatives cut to the heart of the matter. "It's something we didn't necessarily throw out to him; but it added an element that makes the idea easier to read."

To discuss this article, visit the Creativity Forums.