After five gripping seasons, "Breaking Bad", the award-winning drama from Vince Gilligan, is coming to a close. 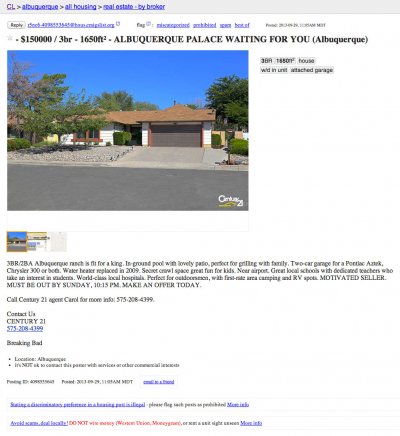 At a time when TV events capable of attracting millions of viewers in real-time are few and far between, the AMC show's finale presents a rare opportunity for advertisers to capture eyeballs. Last weekend's episode drew 6.6 million watchers, the most in the show's history, and as Ad Age reported this week, advertisers paid up to $400,000 for a 30-second commercial for the final episode.

But one brand opted to get in on the buzz around the show without a big broadcast media buy. Just hours before the finale's start on Sunday, real estate marketer Century 21 took to the web with a clever digital stunt: placing a phony ad on Craiglist for the New Mexico home of the main character, Walter White. The three-bedroom ranch style house is listed as an "Albuquerque Palace Waiting for You" at a price tag of $150,000. Die-hard fans of "Breaking Bad" will appreciate the insider references in the post and the fact that the number listed on the ad actually works.

"In today's media environment there's only so many Super Bowls, only so many opportunities to capture the attention and imagination of a mass audience, and Breaking Bad's season finale was one of those moments," said Matt Gentile, director of social media for Century 21. "Walter's house is like its own character on the show ... as the show is coming to an end we felt like the home is going to receive a lot of attention. This show in particular represents really exceptional quality and between those two factors it was a good opportuntity to move forward."

Along with the Craiglist post, the company is doing a related Twitter and Facebook campaign to try and get fans' attention, and get noticed by the actors in the show.

"This form of marketing is definitely bolder" than the company has been in the past, acknowledged Mr. Gentile. For this promotion, the company worked with its agency of record since 2010, Boston-based Mullen.

Beyond the chance to jump in on the excitement around the show without blowing through its measured-media budget, Century 21 is hoping it can help get the attention of a new demographic, namely males in their 40s and those that could be in the market for a home upgrade.

"We do a significant amount of targeting in our social efforts amongst first time female home buyers and this type of campaign helps us to reach into the more intermediate age range and a little bit more slanted towards male to shake things up a bit," said Mr. Gentile. "You also within that demographic find more of the move-up home buyer and not just the first-time home buyer."

According to Tim Cawley, Group Creative Director at Mullen: "The thinking was simple: Despite its dark, unsettling twists and turns, Breaking Bad is a show about family. When families are ready to move on to new things, Century 21 is at the ready. So the final episode of Breaking Bad seemed a perfect opportunity for Century 21 to weigh-in with a little tribute."