The ad world finally closed its creative awards season at Cannes last week, but this month, the fashion community also celebrated its top creators at the annual Council of Fashion Designers of America (CFDA) Awards, which honors the industry's most innovative talents of the year. During the show, a captivating, eclectic set of films introduced the nominees and winners -- among them, a music video featuring a legion of male models singing a Daft Punk song, a charming comedic vignette of female catwalkers reading scripts from famous movies, a quirky whodunnit casting fashion writer Tim Blanks as a sartorial Sherlock Holmes and an eerie atmospheric film featuring wide-eyed waifs in Vera Wang wares. Each had a unique flavor yet lived in the singular world of a dark mansion. Surprisingly, all were created by the same man, Jun Diaz.

Mr. Diaz, the film editor-turned-director represented out of Smuggler for spots, worked closely on the films with Nian Fish, longtime executive producer/creative director of the CFDA Show, as well as her daughter and creative partner, Natane Boudreau. Ms. Fish had originally worked with Mr. Diaz years ago on a few CFDA projects, after she and Ms. Boudreau had seen "The Kid Stays in the Picture," which Mr. Diaz creative directed and edited. "My daughter wrote his name on the popcorn box and said, 'We gotta get this guy,'" recalled Ms. Fish. Eleven years later, they again turned to Mr. Diaz to do something totally new for the 2013 show -- a series of interconnected films that each told a different story. Ms. Fish said they were inspired by the film "Russian Ark," which took place in The Hermitage but featured a variety of stories set in different rooms.

Ms. Fish said she only briefed Mr. Diaz with that basic concept and left the rest up to him, which turned out to be the biggest challenge. "It was particularly hard to come up with ideas that fit the framework of the mansion concept, ideas that felt unique--and not boring, and still made sense to who we were honoring or was being nominated," said Mr. Diaz. It helped that he had full blessing of the CFDA. "The process essentially was that Diane Von Furstenberg (president of the CFDA) shook my hand and away we went," Mr. Diaz said. "The CFDA was very trusting throughout the entire proceess."

With a turnaround time of only three weeks, Mr. Diaz worked with a team of writers, including former Wieden & Kennedy creative Greg Kallerers as well as fashion industry sribes Vanessa Coblentz Beletic and Meg Cuna, on the scripts. Ms. Fish and Ms. Boudreaux did throw out some ideas, including one paying homage to artist Marina Abramovic's "Artist is Present," exhibit from the MOMA, for a film honoring designer Riccardo Tisci. Mr. Diaz then shot a total of seven films over six days at New York's historic Alder Manor along the Hudson River.

One of films' striking features is the performances, surprisingly natural but tinged with a bit of charming awkwardness, as in the Womenswear piece (see video at top) in which models Liya Kebede, Hilary Rhoda, Jessica Stam recite lines from movies like "When Harry Met Sally" and "Pulp Fiction." "With a lot of these guys, if not all of them, this was their first experience acting with dialogue on camera," Mr. Diaz said. "For me it was about getting them to trust that they would be ok. There was some worry they might come across looking ridiculous but they understood we were trying to do something different and liked the concepts, so they all made the leap. As a result, we were able to get some great performances from all of them." 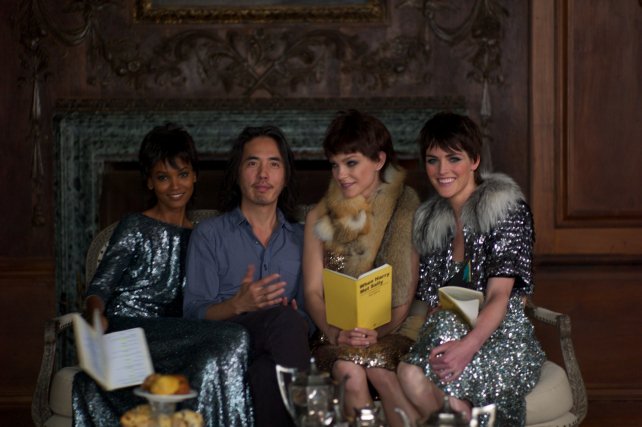 The film introducing Vera Wang's Lifetime Achievement Award was one of the more compelling visual pieces, and perhaps Mr. Diaz's eeriest experience during the production. "There was a moment shooting the film, when I was in the garden, surrounded by these otherworldly creatures staring at me intensely as I gave them direction," he said. "When I was done talking they simply kept staring at me with the most intense expression. I have not heard silence like that in my whole life."

Arguably, the most entertaining film is the Menswear Award introduction, in which an army of male models sing Daft Punk's "Get Lucky." That idea, said Ms. Fish, "was Jun 100 percent. He showed me the inspiration of these British guys in a pub singing, I showed that to the CFDA and they loved it."

Like the womenswear short, there's a charming disconnect between the models' appearance and their performance. "They were really singing," Mr. Diaz explained. "There is a bizarre perfection when it comes to the look of models and couture runway clothing, and I thought the imperfections resulting from models singing a capella would make for a great contrast. That said, we threw in a couple of professional singers into the chorus to keep the song from falling completely apart."

The project benefited from Mr. Diaz's ability to assemble a standout group of collaborators very quickly. "He's all about his team," said Ms. Fish. "Even though we're a not for profit foundation and don't have Hollywood budgets, through his connections, we were able to get them on board." Among them were Mr. Diaz's longtime photography collaborator, DP Andrij Parekh and on post, Cut & Run editors Akiko Iwakawa and Adam Bazadon as well as Absolute Post and The Mill. On sound and music, a key element that imparted a sense of sophistication to sometimes absurd scenarios, composer Nicholas Wright, producers Sara Matarrazzo and Randall Poster and mixer Tommy Jucarone were at the helm.

But most important, Ms. Fish said, "He breathed life into the honorees. He brought heart, soul, story and entertainment."

See the other films below and full credits here.