In November, AT&T launched "It's Not Complicated," a series of spots featuring a straight man and a kooky group of kids who together tout the advantages of the mobile provider's network to hilarious, surprisingly human effect. The campaign has achieved that rare feat of becoming a pop-culture phenomenon, drawing praise not just from the industry but from that buddy sitting next to you at the bar.

Some 'It's Not Complicated' kids

The magic results from a formula of a simple concept, a flexible client and a stellar lineup of creative talent on both sides of the camera -- not to mention that special sauce known as a first grader's imagination. The spots were created by BBDO, Atlanta, and directed by Caviar's Jorma Taccone, best known as one-third of The Lonely Island comedy trio.

Since the campaign's launch, BBDO has produced multiple rounds of spots, including a basketball-themed series [see below] running during this week's NCAA Tournament.

David Christopher, chief marketing officer at AT&T Mobility, noted the campaign has consistently ranked in the top three most-talked about spots, according to BlueFin Labs data. He said the brand was looking to promote its network's various benefits over competitors -- but as simply as possible. "We did not want to create clutter with too many messages," he said. "Our goal was to find a campaign that would build familiarity where each message could live as a part of a whole--all while being as simple and straightforward as possible."

Which is where the little ones come in. The kids' imaginations turn boring brand attributes like multitasking or download speeds into loads of fun -- especially when bounced off the ripostes of moderator Beck Bennett, who's also part of comedy group Good Neighbor.

Case in point: "dizzy boy," [see above] who, to Mr. Bennett's "amazement," is able to wiggle both his head and his hand at the same time. Or the precocious girl who notes that being fast is necessary to avoid being bitten by a werewolf. Or the kids in a new NCAA spot who discuss how to do two things at once in basketball, with the "pickle roll" [below].

A big debate around the campaign is about whether it's scripted, or improvised. According to BBDO Creative Director Stephen McMennamy, it's both, but a lot more of the latter. "We have thought starters that we let the kids riff off of, but as a safety net we do have a script in case among the many groups of kids we sit down with, nothing comes out usable." Turns out, even with the scripted takes in their back pocket, "every time, we end up getting very usable material from the kids," he said. 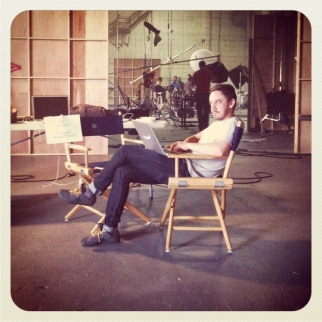 Director Jorma Taccone
"The spots are "guided' improv, so I try to let the conversation occur naturally and redirect when things go sideways, which can happen quickly," said Mr. Taccone. "I've found it's best to let things go a bit weird before butting in, as you never know what crazy gems will come up. If a group is low energy or too all over the place, I'll step in and improv with Beck, feeding them lines until something sparks. It's always best when it comes from the kid, though. It's not that different from improv with adults, only what the kids say tends to be much more surprising."

The campaign is an evolution of an online NCAA-themed effort launched this time last year from BBDO, New York, which featured Mr. Bennett consulting one-on-one with the kiddies to help him pick his March Madnessbrackets.

But it's the group dynamic in "It's Not Complicated" that keeps the comedy level high. In casting, "we basically look for kids with the craziest imaginations who love to talk," said Mr. Taccone. "I try to get a couple overly talkative kids in each group, and two others that are open and attentive but not necessarily as big energy so things don't go off the rails. You always have a group of kids that don't quite work out, however, just based on how you paired them or because it's after lunch and their blood sugar is low."

Which is why each round of spots requires shooting four or five different groups of kids a day, two hours dedicated to each, said Mr. McMennamy. Then the dailies hit the editing room, and the process takes an interesting turn. Most of the spots were cut at Lost Planet by editors Charlie Johnston and Paul Snyder, who said that one of the biggest challenges is preserving the laughs as they happened on set. "It's sort of the reverse of the usual edit process," said Mr. Snyder. "A lot of comedy spots aren't funny until you construct the whole thing. But with this, it's about trying to be true to what made you laugh when you first screened the dailies, rather than about constructing a context around something."

"Anytime we see stuff in the editing room that feels like a performance from a kid, we back way off from that as much as we can," said BBDO's Mr. McNemmany. "And if Beck's reactions feel too scripted, we don't want to use those either. I think that's what people like about it."