Director James Marsh says he feels a bit odd navigating his way around the pomp and celebration surrounding the 81st Academy Awards this weekend in Los Angeles, tough no one who saw his Oscar-nominated film Man on Wire would be surprised he's in contention for a Best Documentary statue. 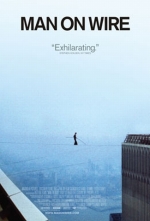 The film that tells the story of Philippe Petit's tightrope walk between the two World Trade Center towers on August 7th, 1974 has already won the Jury Prize and Audience Award at Sundance, BAFTA's Outstanding British film and gained nominations from the Directors Guild of America and Independent Spirit Awards, among others. But after he's navigated the world of awards shows, Marsh is preparing to enter more daring territory ? commercial directing.

Marsh was signed by Maximum Entertainment in March and has just become available for ad work. Maximum Entertainment, founded in January 2008 by veteran DP and director Harris Savides and producers Jim Czarnecki and Maria Gallagher, represents a short but distinguished list of directors that range from Gus Van Sant and Noah Baumbach to Savides himself and Vice's Eddy Moretti. The company recently announced the launch of a new arm, Maximum Content and appointed Richard Linnett to run the division as executive content producer.

"Because of (Marsh's) background in both documentaries and features, he's able to combine those two worlds to make spots that are both stylistic and authentic," says Czarnecki. "He's looking forward to the spot world but he's also looking forward to developing long-form projects that could be the basis for a series of spots. He has the talent of being a writer, director and expert researcher so stepping into the branded content world is something he's interested in as well."

Before selfishly steering the conversation to our favorite doc of the year, we spoke to Marsh about why he chose to step into the commercial ring.

What made you want to get into commercial directing?
I made one spot a long time ago. I made a film in 2000 called Wisconsin Death Trip which was an unusual black and white drama documentary and that got me noticed a bit in Europe when I was living there. So I did a small spot for Audi, but it was a long time ago. Since then I've made a feature and Man on Wire and that seems to have opened up a new set of possibilities in the commercial world, or at least I hope so. 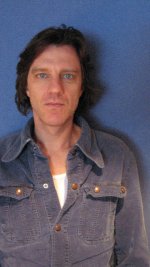 James Marsh
Commercial work just feels like a way of being really productive. I know this from my own experience, that the more you work, the better you get. With the work I've been doing there's lots of down time where you wish there was more to do and opportunities to exercise your creative muscle in that sense. So that's the great appeal to me of commercials, doing interesting and challenging work that's much more immediate. I'd really like to try and develop more of a career in commercials as a way of being really productive, really extend yourself and discover new ways of making work. I think commercial work at its best demands lateral thinking and inventive ways of working and creating images. You're making powerful, persuasive images and I think it's a great opportunity as a director to do that and do it more quickly. There's a limit in features and documentaries in how much you can experiment and how much imagery you need to tell your story and commercials are driven by powerful, memorable images, at least to me as a consumer, and hopefully I can make them as a director.

In commercials you're also sequencing images a lot. The best fun directing a feature or documentary is when you get to really create an image sequence that takes the film somewhere else and commercials, by definition, are that. You need to create something that has a really powerful, immediate rhythm in terms of the imagery and how they're put together and that again is something that commercials offer that features don't always offer.

You've described the Man on Wire story as a "criminal conspiracy" and, as many have pointed out, it's constructed very much like a classic heist film. You've said that was an easy choice, a defining choice, to structure it as a genre film. What were some specific influences?
It was largely from memory because growing up I loved those kind of movies, heist films. There's one I remember quite vividly called Rififi, a black and white French film from the 50s about a group of robbers who stake out and break into a jewelry shop. Now, I didn't actually watch it again (for reference) but I remembered it very well. I also used the general grammar of the genre, like "inside man" and terms like that which we use in Man on Wire. The story just lent itself on that level since, first of all, it's a group of people coming together to do a break-in but they're not stealing anything. It actually inverts it, they're not there to steal anything but to give something. Philippe is there to perform and make a beautiful spectacle for the people of New York, who have no idea it's coming. That said, the manner in which they go about it is very much like a heist film. They have floor plans and figure out how to sneak in with disguises and all that, so it's a really worked out caper. And ultimately, what's at stake is this man's life. So it was a great gift of a story because I was allowed to be playful with those genre elements but it was all grounded in the truth. We found so many examples of the classic heist film in the story of Man on Wire, so it was a really easy thing to structure the film that way. 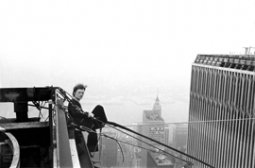 It's funny because I hadn't noticed at the time, but in retrospect it has a very similar structure to Reservoir Dogs, like the time line where you start with the actual break-in then flashback to how the whole plan came together and the set-backs and characters that form this ongoing crime that's unfolding as the film proceeds. So there wasn't any conscious imitation of a certain film or group of films, it was more just having the knowledge of that genre and what our story could do with it. Constructing the film using that structure, it became much more of a movie and less of a documentary. That's what I always wanted because Philippe's story is such a real life fairy tale that it feels much more like a movie than a conventional documentary you might see on television. So the idea was to make it as big and loud and thrilling as possible as a documentary and use these real-life elements but create a film that people could experience on the big screen and I think we basically achieved that.

Speaking of making it more like a feature, while there is some re-enactment, you had a ton of great archival footage of his past escapades and practicing, which went a long way in making the film more like a feature. It was able to show the audience first-hand how they prepared instead of just having documentary-style interviews telling the story.
Yes, (the archival footage) has the quality of a Truffaut film. What Philippe gave me was this very charming archive that was shot by a pro cameraman so it was really well shot stuff. They spent a week filming their rehearsals in France and then abandoned the idea because it would've been impossible to pull of this very complicated crime with a film crew following them around. But we got great footage, it was about nine rolls of color negative that hadn't even been processed. I just thought it was beautifully preserved negatives with beautiful color and it just gets you to the heart of the story in a way because it's young people fearlessly doing something they probably wouldn't do if they thought carefully about it. In the footage you see some of the real problems, like how they're going to get the wire across (between the two towers) and you see them practicing firing the bow and arrow different ways. So that footage was really invaluable because it really roots it all in reality while also having this very charming fairytale quality to it as well. It wasn't just nasty looking archive film but beautiful in its own way. 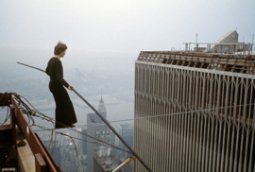 There's been a lot of mention of it being a life-affirming story and Phillip's called that mission a "life wish" as opposed to a death wish. How much would the mood or spirit of the story change if he had died trying?
Well, there are two things I never really talk about because they're both hypothetical. It's just that what happened happened and what didn't happen, didn't happen. And in a documentary that's a pretty crucial distinction. That said, everyone involved knew that a man's life was at stake and certain people backed away for that very reason. So of course we're very aware and everyone involved in the plotting of the event is aware of it but it didn't happen and that's what's so brilliant about it. It shows those thoughts are redundant. Philippe didn't think about it, he never had a death wish. Quite the opposite and he feels more alive than ever before on the wire at that moment so he's very aware of that. One of the very reasons he walks tightropes is because of that constant possibility. So it did happen and it was beautiful so I don't think about the other story that didn't happen.

The film is also about a different time. I think you said once that Nike might sponsor such an event now. Do you think such feats are still possible?
Well, as Philippe would say, anything is possible. But certainly a lot has changed. You can't bring a bow and arrow through JFK airport or lurk around American monuments taking photos, the punishments and disapproval in place are so much stronger now. What's bizarre about Philippe's story is that it happens at a time when America, and New York in particular, is in a pretty dark place. And yet, it was more innocent, which is an odd paradox.