MoMa's latest Goes Behind The Art

Living in New York, there are gaggles of cultural must-sees and everyone has their own particular way of prioritizing which ones are worth their time. One person's Lincoln Center is another's Yankee Stadium. To that end, MoMA's most recent project reaches out to those who might not have the museum at the top of their visit lists.

In "I See," by TAXI, New York, Frank stands looking at Russian artist Vladimir Baranoff-Rossin?'s 1913 sculpture, Symphony Number 1. He's got that bored look in his eye of someone forced to be there by friends or out-of-town visitors, until the robotic audio tour voice begins to relate the piece of art and the inspiration behind it, to Frank's own life. 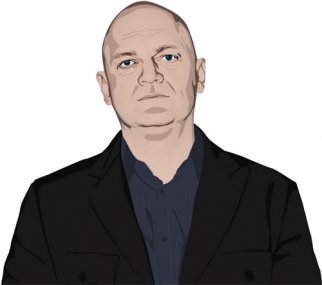 Paul Lavoie.
The short film, directed by Azazel Jacobs, marks a return to copywriting by TAXI chairman and co-founder Paul Lavoie. It's also the first of what will be a new, annual series of commissioned films by rising filmmakers, and will be shown before film screenings in the museum's Roy and Niuta Titus Theaters.

We spoke to Lavoie about the goals behind the short and more.

How did this idea come about?

The challenge that they gave us was to open up a conversation with a younger audience, maybe an audience that wasn't necessarily prone to going to the museum. So the objective was to find ways and a language that might connect with this group and open them up to the idea of exploring a bit more into contemporary and modern art. Essentially, it's not about talking to people who would already go to the museum, but more about talking to the audience that would more likely be going to a baseball game. To try and get them to consider going to the museum as they would any other form of entertainment. It's important to find these common denominators and the points of interest that will get their attention.

So the idea I was exploring when I wrote it was to not think about the actual painting or piece of art itself, but to look at what really inspires artists, and that's life. And life is the intrinsic common denominator between an artist and the younger audience. When you're young, you're embracing life and finding things out but often we think of these artists as old and dead. But the sculptor featured in the piece, Rossin?, was only 22 or 23 when he did that sculpture. So I started thinking how the inspiration for this particular piece of art could relate to the lives of young people in New York.

What I really like about this piece is that the director Azazel Jacobs really nailed it. The key was to make sure it was under-played and subtle. The other thing I like about it is that when we showed it to younger people they really related to it. Sometimes when you're trying to get their attention the instinct is to go edgy or whatever, but I think the authenticity and intelligence of it really allowed them to relate to it on a different level. It's a good lesson to any brand, to just be yourself.

How did you decide to feature Symphony Number 1?

There were three criteria. First, I wanted to get a piece of sculpture that most people might not know. Something a bit more discreet. Then, practically, we looked at the pieces that could be shot well and could be shot around. And finally, after some due diligence, I read up on Rossin? and found how he was disrespected as a young artist and I thought, Perfect. Because it relates to young people. Everyone knows the feeling of starting off in a career or in adulthood, and the struggles that go along with that. We make mistakes and experience failure. And that's something the artist knew well, too. I really liked the idea that he created two pieces and ended up being so frustrated that he threw one in the Seine, and after achieving some success, actually went and retrieved it.

It was just about relating all the different emotions bound up in the piece and trying to relate it back to this young person looking at the sculpture's life ? his girlfriend, the economy, things like that. And this artist was trying to understand these things too and convey them in this piece.