Mullen Brings the Bear to Boston

READ THIS NEXT
Following ‘Viva La Vulva,’ Libresse goes inside the womb in a powerful new campaign
(from left) Greg Almeida, Bear and Jesse Blatz
Credit:

The 2009 NHL playoffs start today and just in time, Mullen has launched a new campaign for the Boston Bruins. The work, the agency's first for the team, introduces hockey fans to a different kind of mascot. A giant bear enforcer. But instead of dropping the gloves on the ice, this bear patrols the rink cracking down on a variety of fan faux pas, grabbing the attention of hockey fans and bloggers almost immediately.

We spoke to Mullen creatives Jesse Blatz and Greg Almeida, as well as executive creative director Mark Wenneker about the campaign, bear suit prices and more.

A lot of hockey advertising features a serious tough guy vibe. What lead you to this approach?
Blatz: We were really just psyched to do something with the Bruins. It's such an awesome client and we're all local guys so the Bruins are a brand that we've been watching since we were kids. So when this opportunity came, we just wanted to do the coolest thing we could.

Almeida: It's really like a dream come true. Being such a huge Bruins fan, to be able to make spots for your team, it's amazing. We really just wanted to do something fun. We just wrote it from the perspective of a fan. Just fans talking to fans. The Bruins have their swagger back and we wanted to find a way to recognize that, have fun with it and make it funny. What's funnier than a guy in a bear suit? 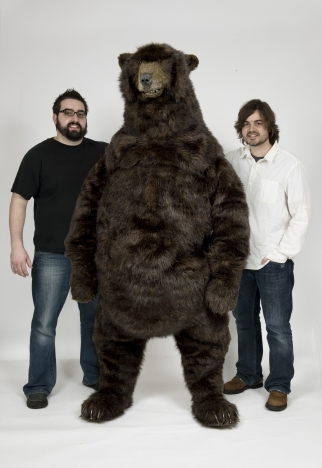 Almeida: It's funny because the Bruins have their own mascot, Blades, who's a very cartoonish character that's really more for the kids. We really wanted to play up the whole icon of the bear and make him a bad-ass. He's an enforcer, holding up these rules of fandom.

Wenneker: We were a little at the mercy of the kind of bear we could get.

Wenneker: We worked with (director) Harold Einstein who was a major contributor to the comedy in the spot.

Almeida: Yeah, Harold was great to work with and he brought so much to the table.

Blatz: Although this shoot had a relatively low budget, we used it to our advantage. We shot it on 16mm, which looks good and feels right for hockey. And the bear suit, I feel like we struck gold with this strange, cheaper version of a bear.

Almeida: You'd be surprised how expensive a bear suit can be. When our producer came back with some numbers we thought it was a joke. There are $100,000 bear suits!

Blatz: Yeah, with animitronics and muscles that move.

Any plans for the bear to wander the rink during the playoffs?
Almeida: We've got some plans but nothing we can talk about right now.

Did you think the Bruins and Habs would meet in the first round of the playoffs or was it just a lucky guess?
Almeida: Oh yeah, we knew it all along. No, really, we didn't even think (Montreal) would make the playoffs. (laughs) There's also print ads where we take a few swings at the Habs and the (Philadelphia) Flyers, so it was fun.

Playoff first round predictions?
Almeida: Bruins in five. I'll give Montreal one.