Behind RKCR/Y&R's pop up agency

For the week of August 24, RKCR/Y&R set up a pop up agency, RKCR/Y&R Local, a few blocks from its HQ in Camden Town and offered its creative and strategic services to local small businesses and sellers in the Camden markets.

The pop up concept is part of an ongoing program created by RKCR/Y&R and facilitated by Camden Town Unlimited, an organization of local business owners with a mandate to boost the area's commercial fortunes. RKCR/Y&R had been working with local government body the Camden Council and CTU for the past year, and had initiated the creation of a Creative Council, bringing in talent from some of the other creatively-driven companies in the area, like MTV, Hugo Boss, Proud Galleries and The Roundhouse. The pop up shop idea came out of one of the Creative Council sessions. The program, launched in June, offers a way for local landlords to make use of empty retail space and attract new tenants.

"We've been realizing that in the downturn everyone needs a bit of help," says RKCR/Y&R ECD Damon Collins. "They've been talking to us about the fact they've had a lot of people foreclose on leases, etc. We started saying, lets do something with the shops. We've been helping the council, the town; why don't we help the businesses?" 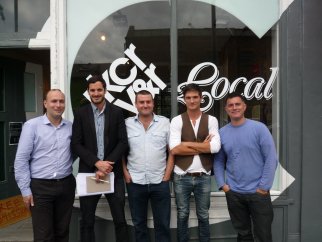 While perhaps best known as the urban setting for the film, Withnail & I, the London borough of Camden is also famous for its stall markets. The neighborhood is known as a music and art hub, but can get a little gritty. "It's a real town," says Collins. "You'd never say it was pretentious. It's got an edge to it."

Since opening RKCR/Y&R Local, the agency has worked with around 30 local entrepreneurs. Among them: the LCB Surfstore, the aforementioned seller of pierogi dumplings, a local purveyor of frozen banana treats, the Camden Locks hair salon and tattoo parlor, an off-license (liquor store), and others.

The Local shop was anchored by two agency creative teams and a strategist, and a series of other volunteering creative teams rotated in throughout the week. The shop is helping out with everything from posters and other advertising to logo design, business cards, packaging and web sites. RKCR is doing deals to score affordable media for its new clients, and also asking those clients for quid pro quo media deals, where one retailer, for example, will offer to post ads for another local business in exchange for RKCR's services. On Friday, the agency hosted a showcase of some of the creative product produced for its Local clients.

While the pop up idea is an admirable example of a company giving back during harsh economic times, in an era when ad agencies are exploring more entrepreneurial avenues, the effort also allows the shop to stretch its business and creative perspective. Collins calls it a "great five day research project" and a "reality check."

"Every single client is looking for real insight into the consumer," says Collins. "Here, you're actually out on the street. You're not in an office paying people to ask people questions. You're listening to people and talking about what real people are thinking and doing."

RKCR/Y&R Local is the third business to occupy the pop up store at 22 Chalk Farm Road. "We're very keen to find more premises in the area so we can continue the program," says CTU chief executive Simon Pitkeathley. "We've proved that this initiative makes properties easier to let and lets them more quickly." The reaction to the pop up ad agency among local retailers has been "overwhelming," says Pitkeathley.