Somewhere, right now, someone you know is playing World of Warcraft (WoW). It might be your company's IT guy, it might be a senior partner at a law firm or it might be that dude in your apartment building who wears chain mail out in public. All share a double life within the world's most popular (in terms of monthly subscribers) massively multi-player online role-playing game (MMORPG). If you've never heard of a MMORPG, they feature a huge number of online players at time, playing within a world, usually hosted online by the game's publisher, that is ever-expanding and changing, even when players are away from the game. WoW reportedly has nine million active players and now, even for just one TV spot, one Toyota truck.
"Truck Summoner" by Saatchi & Saatchi, Los Angeles, introduced a Toyota Tacoma to a game usually populated by dwarfs, elves and other sci-fi Tolkienesque creatures. The theme follows previous executions in the campaign that have seen the Tacoma survive seemingly impossible beatings at the hands of Robosaurus and the Loch Ness monster, and now faces a challenge in the realm of Leeroy Jenkins.
We spoke to creatives Dino Spadavecchia and Greg Farley about the process behind the spot, their own WoW addictions and more.

How did the partnership with WoW publisher Blizzard come about?
Greg: Well, people had been asking Dino and I to play World of Warcraft for about a year now and we resisted. Then we kept seeing these videos online of people doing absolutely ridiculous things with WoW (footage), making music videos and all kinds of little stories and that got us thinking, What the hell? What if we put the truck in this kind of a situation, make it look like an authentic screen grab and take it from there? WoW works perfectly because it's a fantasy world and there shouldn't be a truck in it. So, we called up Blizzard and they were open to the idea. They'd seen our campaign and decided to help us out with the authenticity and making sure everything seemed perfect, except for the fact there's a truck in there.
Dino: Obviously the truck never existed in the game so we had to create a truck for this world. But they also never had a dragon heart in that world, so we worked with them to create that and now they've decided to make that the official heart for dragons in the game.
Greg: Yeah, now if you kill a dragon in the game you can get its heart. Blizzard was an absolutely wonderful partner on this. We worked with their engineers to make sure the characters were doing the exact right thing, every weapon, the clothes, every behavior. We also did a bunch of test recordings with their people to play around with the dialogue to see what fit and what didn't.
Dino: Our friend was at a bar the other night and heard someone yell out, "I am the law giver!" It's weird how far some of these things reach sometimes. 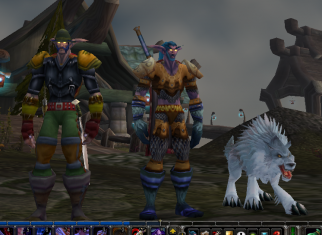 Greg Farley, Dino Spadavecchia, and CD Steve Chavez, as seen in WoW.
What were some of the biggest challenges?
Dino: Well, we had to do all the visuals first ? all the directing, characters behaving with each other, the truck, all the comedic beats, all the timing ? before we even started any of the voice casting.
Greg: At that point it was also trying to help the client understand what's happening because we couldn't tell them what the people were saying or let them hear it.
Dino: For casting the voices, we made it mandatory that for the dwarf and the elf, the people had to be at least a Level 60 in WoW. And we had a computer at the casting session to check. Because someone who's used to playing would be better at the dialogue. For the magician who drives the truck, we went in the opposite direction and cast a very experienced commercial actor and he really brought a lot and made the spot funny.
Greg: Also, for directing, because we wanted it to look like an authentic screen grab there are no cuts in it, so every time we wanted to make a change they'd have to re-render the entire spot.
What are your WoW characters and levels?

Dino: Since we sold the idea to the client we had been playing the game for legitimate reasons like checking out camera angles and character behavior and now we're both completely addicted to the game. We even have a game guild called "The Lawgivers."
Greg: I started playing about a week and a half before Dino, so I was a few levels ahead of him and because of that we couldn't do stuff together very much. So he's been getting me to slow down, which is hard 'cause it's so addictive. We're both about Level 23. For characters, Dino's a warrior named Espanol, which is named after our creative director because we call (Steve Chavez) the Spaniard here at the office. My character is named after Dino's last name, Spadavecchia because I wanted to goof on him and the character's got a big handlebar mustache and wears a brewmeister hat.

Did you score any game secrets or cheats from Blizzard?
Dino: We got one little happy secret ... but I should clarify they didn't advance our players.