Behind the Work: ESPN 'One Game Changes Everything' | Ad Age
Skip to main content

Behind the Work: ESPN 'One Game Changes Everything'

In early April, ESPN and Wieden + Kennedy started the drum roll on the sports network's coverage of the 2010 FIFA World Cup with the "One Game Changes Everything" campaign. The first bit came in the form of the "Robben Island" spot, an uplifting real life tale of a soccer league formed by political prisoners fighting apartheid in South Africa.

Directed by Park Pictures' Lance Acord, the spot set the tone for the rest of the work to follow. Bold and big, it celebrates the history of the sport and the global immensity of the event. It also seeks to preserve the authenticity of the soccer experience for passionate fans. "The World Cup being once every four years, the biggest tournament in the world, the campaign needed to match the epicness of it," says W+K, N.Y. copywriter Nick Sonderup. Moreover, lessons learned from the network's 2006 World Cup experience factored into the equation. "I think they got criticized for not covering it the best they could have covered it," says account director Ken Fineo. "A lot of people ended up watching Univision's coverage even though they didn't speak Spanish because the coverage seemed more authentic. So this campaign had to be authentic and show the bigness, but do so in a very authentic way that doesn't alienate soccer fans."

Subsequent executions included the "United" anthem, which shows how soccer can break down political and cultural divides, and "Power of 10," a nod to both new and the most passionate soccer fans�only those in the know are aware of the special place that the number 10 has in the sport of soccer. All but one spot feature Bono's V.O. or vocals.�what's bigger than Bono? And the Soweto Gospel choir, whose music will be featured at the actual event, also provides backing to a new version of "Where the Streets Have No Name."

Perhaps the most stunning component of the push is the print and outdoor, which feature 33 original murals that tell the story of each World Cup team. Created by Bernstein & Andriulli-repped South African artists Am I Collective, the posters take inspiration from old African movie posters. "As we were doing our research, we came across this amazing art form from Ghana, old movie posters, really crude," says art director Mathieu Zarbatany. "We fell in love with that style and thought it would be a nice platform for these allegories. 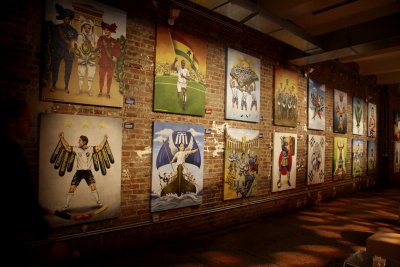 Three-foot by four-foot versions of all the murals were exhibited in May at an invitation-only ESPN charity event in New York City, all the proceeds of which went to benefit Grassroots Soccer, an organization that helps to educate Africans on AIDS issues through soccer. A limited edition art book featuring prints of all the artwork was also given to attendees of the event. From now until the end of June, the art work can be viewed at the Time Warner Center Gallery in New York. Other OOH placements have popped up around the country, including a prominent display outside of Port Authority in NYC. 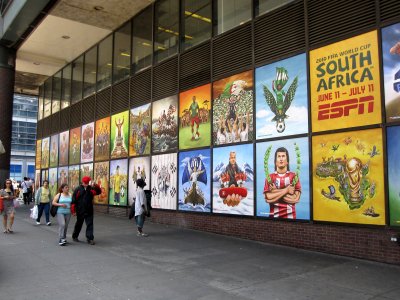 The murals also appear in magazine inserts, on bus shelters, in subway stations, and large-scale handpainted versions have popped up on the sides of buildings in various ethnic New York neighborhoods. The Greek team mural, for example, appears in Astoria, Queens. Digitally, the art also appears on the ESPN World Cup site and interactive banner ads that provide info on teams and schedule. 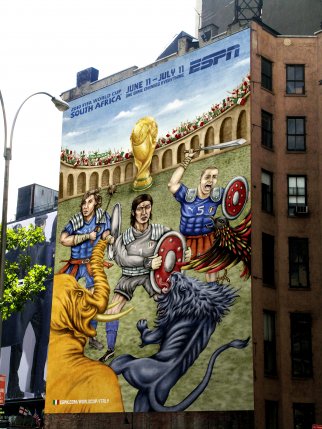 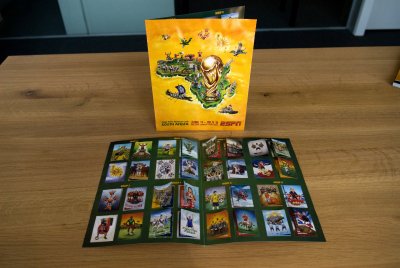 The artwork is stunning on its own, but each piece is also rife with story and trivia about each team that perhaps only the most diehard fans can decipher. For example, Chile's mural depicts the team's slogan "Por la razon or la fuerza," or "By reason or force." 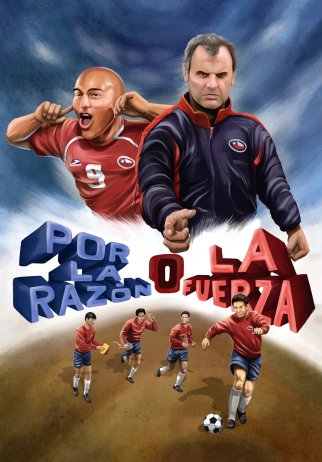 "The player on the left is known as a reasonable player, while the coach on the right, his nickname is El Loco," says Sonderup. The Chilean mural also shows players holding various edibles. "Before playing every opponent, they eat food from that country, so before playing Switzerland they ate swiss cheese, before playing italy they ate spaghetti, they drank vodka before playing Russia, and they beat all these teams," adds Zarbatany.

View all the murals below and test your own World Cup team knowledge. Click on captions if you get stuck.

Speaking of food, in the coming weeks, Wieden and ESPN will roll out another locally-minded effort: Match Trucks. The 24-foot branded street food trucks will be equipped with hi-def LCD video screens and will stop at various neighborhoods in New York and Los Angeles, broadcasting the games and serving authentic street food inspired by World Cup countries. The chef de cuisine? Noneother than the food truck maestro himself, Chef Roy Choi of Kogi.

True to the Game

Authenticity was of utmost importance for all the work, from the spots to the outdoor. The Robben Island commercial, for example, was shot at the original location. "Not that many people are granted permission to shoot on the island," says producer Nick Setounski. "Just because it was so important for us to stay true to the real facts, we had to make sure we shot there. There's even a stage recreated in Capetown of this prison for shoots, so we could have easily shot there at less expense, but we didn't. We studied everything, had to get the right uniforms, interviewed ex-prisoners. We even used the original net and goals."

Shooting on the original site also led to unexpected snafus, however. "The island was about 40 minutes by ferry from Capetown," Setounski explains. "By the time we were midway through the shoot we were told that the tide had risen and we couldn't go back. We had a huge crew with us-100 actors, 50 crew, agency, clients. And on the island there's nothing but a prison and some penguins. So it was mildly worrisome�we had a big shoot the next day in Capetown at the actual World Cup venue. But eventually we got permission from Capetown and the island management to get out on helicopters."

For the murals, "we came up with the stories, but we also held roundtables and were always consulting with ESPN"s soccer experts," says Sonderup. It also didn't hurt that "all of us are soccer fans, the team that was assembled here," says Setounski. "I'm from Europe, I grew up with the game, Nick [Sonderup]'s a former college soccer player. We had to bring all of our collective knowledge to make sure ESPN came across as a network that gets the game and the importance of it to the world."