Behind the Work: Lexus Dark Ride

Creative boutique Skinny and Stink Digital/Skunk recently debuted Dark Ride, Lexus' introduction to its upcoming new hybrid, the CT200h. The campaign takes the idea of interactive film to the next level, and allows the visitor to navigate a high speed chase, enjoy the ride from multiple angles and contribute his or her own lines along the way. The agency's Chief Creative Officers Jonas Hallberg and Liron Reznik, along with Stink Digital EP Mark Pytlik, gave Creativity an in-depth behind-the-scenes look at what went into the massive production, and the challenges of creating a film without its lead star?the car itself.

What was the client brief and how did that lead to Dark Ride? Did the client want a major digital production originally?

Jonas Hallberg: Lexus wanted to build advocacy, buzz and generate handraisers for the new Ct 200h compact hybrid...creating a gateway to new buyers (Gen X/Y) for the Lexus brand. There was no specific desire for a major digital production at that point in time.

Liron Reznik: We believe that the "product is your best marketing" and hence the natural thing to do was to get the audience in the car, converting triers into buyers. The only hitch was that there were no cars available for use. Skinny wanted to find a way to get this younger digitally-savvy audience to get familiar with the CT 200h and feel how much fun it is to drive, months before it would be available in dealerships. To that end, we opted for creating an immersive interactive film that brings together the thrill of high production Hollywood movies with the latest in interactive technology, thus providing an exciting test-drive experience, putting the audience 'in the car' riding shotgun and taking the co-star role.

What was step one in terms of tackling the project? Why did you decide to go with Stink Digital for this particular project?

Hallberg: Skinny chose Stink Digital as its production partner for Dark Ride due to its expertise in bringing together the worlds of film and interactive to produce amazing experiences like Philips Carousel. Stink Digital showed they "got it" from day one and helped develop the Dark Ride treatment and approach. It has been instrumental in helping Skinny develop the Dark Ride experience and pushing it to be super compelling, engaging and state of the art.

What inspired the story? What were the biggest challenges in terms of arriving at the final concept?

Hallberg: Skinny knew that the key to attracting a younger tech-savvy audience was to combine an engaging narrative with participation opportunities that help put the user in control of the experience. We decided to create an experience where the user plays a part in the story itself and were inspired by the CT 200h when thinking of the film narrative. We wanted to find a story that helps show the fun-to-drive nature of the car and the fact it's stylish, has an aggressive stance and lots of personality. We came up with a thrilling action film plot that puts you, the user, in the role of "navigator," helping Tony, the driver of the CT 200h prototype, bring the car from the Nevada desert to a Los Angeles safehouse, and protecting it from a variety of enemies that wish to get their hands on this unique fun-to-drive hybrid. 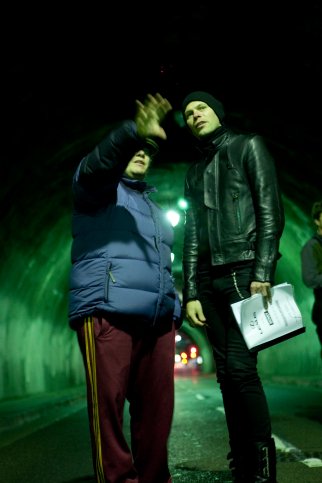 Mark Pytlik: Once the project was awarded, we worked a lot with Skinny, [the director] James [Brown] and the rest of the team to shape the script into something that made sense for the product, the production and the interactivity. Since this was such a massive technical challenge on both the film and interactive sides, we involved our creative techies from those first meetings, and that helped the overall process a lot.

Casting?anything interesting about this process? Why did you decide to go with that particular actor for the lead role?

Hallberg: Skinny chose Norman Reedus for the lead role of Tony the driver. Norman is a cult figure and we love The Boondock Saints, the film and cultural phenomenon that propelled him to fame. Norman had what it takes to assume the role of a person that has a wild streak but is still likeable, someone you root for. 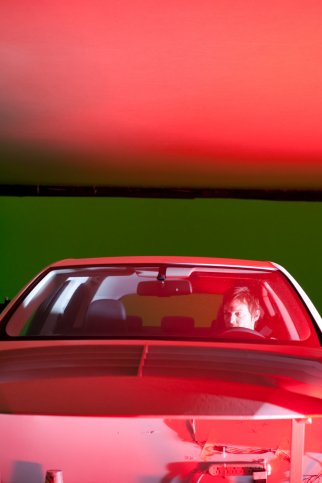 Can you briefly describe the phases of production, what was involved with each?

Reznik: Skinny came up with the overall idea and the basis for the Dark Ride story. Then, in collaboration with Stink Digital, director James Brown and producer Aris McGarry, that basic story was further developed into what it is today (from both a narrative and technical execution perspective). We developed a full script and focused on pre-production and hashing out ways to deal with some key technical challenges.

What were some of those challenges?
Hallberg: There was no CT 200h car available to use for the shoot! We had to come up with a CGI solution to put the car into the film; we had budget constraints and wanted to maintain an agile production method that relies almost exclusively on available light sources; we had to find a way to make the consumer feel they are 'in the car' when going through the experience. 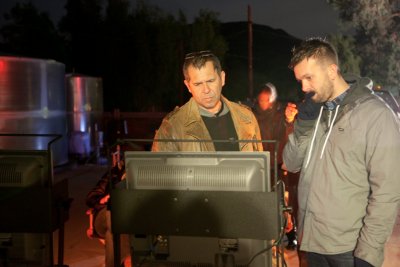 Can you tell me about the shoot itself?
Reznik: Dark Ride was shot on location over a period of six days in downtown Los Angeles, Calif. and in the California desert, plus two in-studio days. The shoot was divided into two parts. First, we shot all the exterior car shots (using a stand-in model that would later be replaced using CGI) and the p.o.v. shots from inside the car. Second, we shot Norman Reedus on stage (green screen).

Hallberg: After the shoot, we went into post-production and concentrated on a few parallel streams: developing the CGI look for the vehicle and replacing the stand in model with the CT 200h, creating a trailer for the experience that went live on March 31st, building the interactive experience components such as the user controlled 210 degree p.o.v. by merging the in-studio shots with the live shoot shots and creating the lexusdarkride.com website experience, involving all interactive elements such as interactive decision points, audio recording of user voice, webcam image functionality, music integration and choice. 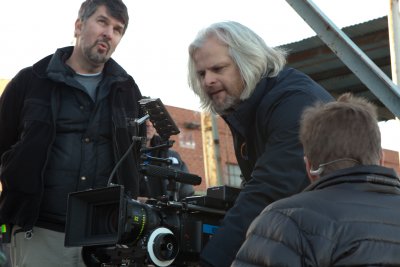 We also knew we would need to find a way to allow the user to "control" the camera movement and pan over a 210 degree spectrum. We did a bunch of tests and opted to use a 6MM lens that was later undistorted in VFX post production.

We used five cameras to when shooting on location. One camera, the 6MM lens which was bonnet-mounted, was used to capture the user p.o.v. Two other cameras were bonnet-mounted looking towards the rear, capturing the action seen through the rear-view and side mirrors. Two other cameras were used to capture the action and car exterior. After each scene was captured, we pointed upwards the two cameras capturing the action seen through the rear-view mirror, so that we would record all the environmental light sources the car is passing (to later be used in-studio).

The stand-in car had night time LED tracking markers custom designed by SpeedShape, (our VFX partner) to ensure a proper camera track in the low light settings that Dark Ride was shot in.

Each scene/environment was captured using spherical HDRIs [high dynamic range images] coupled with lots of reference photography to enable us to then project all light sources onto the car in the CGI work phase.

In studio, we used an interior model of the CT 200h against a green screen background, and positioned it beneath a large LED screen that projected the environmental light we captured during the shoot, to create a true-to-life representation of how the passing light would reflect into the car interior. We focused on shooting the interior of the car including Tony by placing the 6MM camera inside the car, positioned where the passengers head would be, so that we capture a 210 degree view of the action matching the plates captured by our camera car which were then composited together (as if the user was in the car looking around). 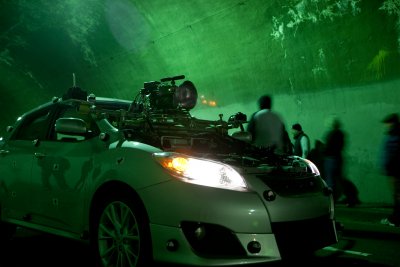 What were the biggest technical and digital challenges involved?
Pytlik: In post-production we had a few major challenges: all exterior car shots needed to be tracked and stand-in car replaced with our CGI version of the CT 200h. Speedshape used their spherical HDRIs and reference stills from the shoot to project back reflections, lights, shadows onto the CGI car to make it feel in-situ.

All interior car shots were produced by combining the 6MM footage from the on-location and in-studio shoots?the background and environment came from the on-location shots, the in-car action came from the in-studio shots), as well as adding in the footage captured by those cameras that were rigged at the exterior rear view mirrors capturing the action seen through the rear-view and side mirrors; all interior dashboard features and lights were enhanced during this post-production phase. 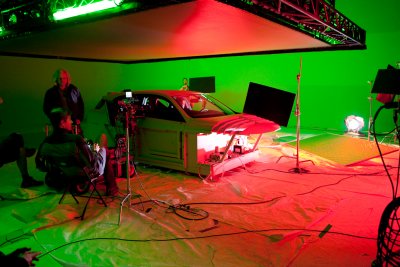 What's involved in terms of the interactive components? How hard was it to create a seamless experience?

Pytlik: We seriously relished the opportunity to make this experience interactive on a number of different levels. In addition to the pannable 180 film sequences and the interactive moments, Dark Ride has record-your-own-lines functionality, webcam + Facebook Connect integration and shareable personalized trailers. We also worked with the folks at Dinahmoe in Stockholm who gave the whole experience an adaptive soundtrack with a 3D sound mix. Beyond that, design was also important. There isn't a massive amount of design in this project, but when it's there, it really has to punch through, so we focused a lot of attention on making this as slick as we could.

Looking back, what were the biggest/most important lessons you learned from this project?

Hallberg: We learned that the "film meets interactive" space is super interesting and ripe for further innovation and development. We believe it offers brands an opportunity for deep engagement by combining education and entertainment into one compelling experience.

If you were to do it again, what would you do differently?

Reznik: We have no regrets, since the technology available improves and changes frequently we're sure that if we were to do it again we could take it to the next level.