Gothenburg-based interactive boutique Kokokaka recently launched its latest online effort for Wrangler Blue Bell's Summer/Spring 2010 line. The new site takes a sexy approach to showing off the clothes?visitors use their cursor to drag model Tony Ward into a variety of unusual poses, and even tear the shirt off his back.

What kind of brief did Wrangler give you guys, and how did you go about answering it?

The brief was about showing six different outfits in an inspiring way and keeping the core values of Wrangler.

You did last year's Blue Bell site as well. How did you want to change things up compared to that?

Last time was the relaunch of the Blue Bell brand and we worked a lot around creating the right mood and feeling. This time we wanted to take the interactivity to the next step. 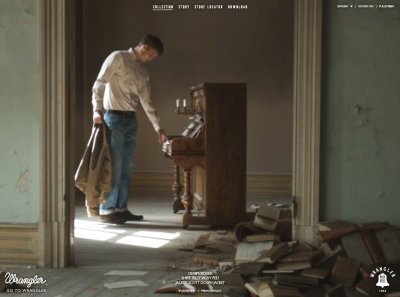 Overall, what were the biggest challenges involved in creating the 2010 version? Specifically, what were the obstacles in terms of the tech involved and building the site's functionality?

We actually had the concept already before we did the first site. The biggest challenge was to come up with interesting movements and create the feeling that you as the user are grabbing Tony and actually dragging him over the floor. The programming part was rather simple, we built an application to record the mouse movement on top of the film and then used the data to sync the film to the mouse movement in the site.

Who directed the work, and what kind of camera did you use to shoot?

Petrovsky & Ramone directed it and did a fantastic job. Axel Lindahl shot it and we used the RED 3K, 50fps. It was a fantastic team!

Any other other production related challenges in terms of shooting/editing?

We spent one month removing the wires we used to drag Tony around. 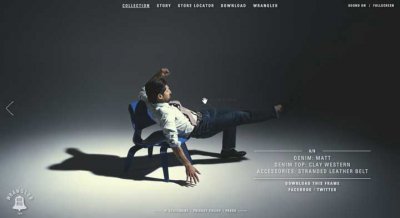 Music was a big component of both sites?last year's was basically an interactive music video. Did the music play a big role in this year's version as well? How did you choose the track?

We love to work with the music a lot. We had to do a couple of songs before we found the one that worked. The music had to have a strong rhythm to match the movements and inspire the user to dance with Tony. 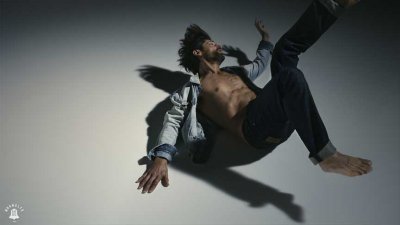 What about casting? How did you choose this particular model?

Wrangler used Tony Ward for the look book and we thought he would be perfect for the job. He really did amazing work. We tied him up with wires and dragged him around on the floor, up in the air and had him standing in the same position for 15 minutes. You can actually download every frame in hi-res from the site and he looks amazing on everyone of them!

What did you learn from this particular project?

To keep the core of the concept and keep it simple. It always works!