Interactive Game Features Avaya Customer the San Jose Earthquakes
READ THIS NEXT
BtoB Marketers: Are You Mobile Yet? 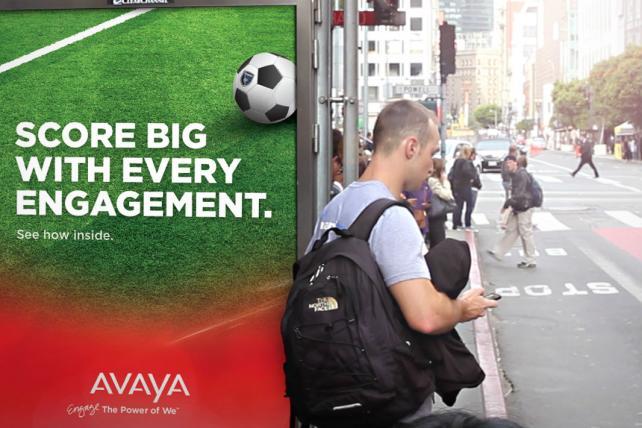 The kiosk game, "Avaya Stadium Shootout," is running in bus shelters in San Francisco and Silicon Valley, and is designed to engage commuters and raise awareness of Avaya as a leader in business communications.

The out-of-home game is the newest element in Avaya's overall brand campaign, "Imagine," which launched earlier this year. The branding effort and the interactive game were created by Gyro Cincinnati. The campaign budget was undisclosed.

"Our brand centers on the value of engagement to businesses. Avaya believes that better business occurs when meaningful communications occur between teams and customers," said Laura Misdom, director-global brand management and integrated marketing at Avaya.

The "Imagine" campaign is a broad, integrated effort that uses customer case studies to show how Avaya can help businesses through its communications and collaboration services. It includes online ads, video, radio and out-of-home.

The interactive game is a more targeted effort that features one Avaya customer, the San Jose Earthquakes, and its naming sponsorship of the cloud-enabled Avaya Stadium, where the 'Quakes play.

"Our goal was to reach as many decision-makers and influencers in Silicon Valley as we could," Ms. Misdom said. "The interactive bus-shelter game was different than anything Avaya has ever tried."

To develop the interactive campaign, Avaya partnered with Gyro, its agency of record, and media company Clear Channel Outdoor.

The interactive game is displayed on large digital screens inside bus shelters, and lets users shoot goals and score points in a digitally-rendered Avaya stadium. After playing the game, users can sign up for a chance to win VIP tickets to an Earthquakes game.

"We are trying to make people aware that Avaya is a solution/technology company," said Mike Tittel, exec creative director at Gyro, Cincinnati.

"There is a bit of a legacy perception that they are a telephone hardware conference-system company -- they have a lot more going on than that."

"The kiosk provides a very engaging experience, brought to you by engagement company Avaya," Mr. Tittel said. "The game is simple, it's fun, and it's the perfect thing for people who are standing there bored with their iPods waiting for the bus."

Since the campaign launched, the interactive game has generated over 37,000 sessions by more than 21,000 unique users. The average time spent engaging with the game is 80 seconds.