GE and Other Companies Are Using VR to Demo Oil and Gas Equipment, Locomotives and More
READ THIS NEXT
BtoB Marketers: Are You Mobile Yet? 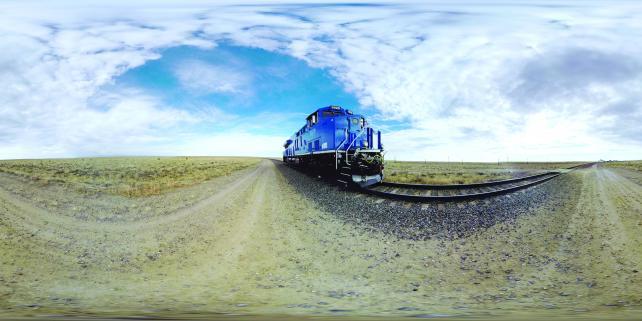 A shot of a GE locomotive from a virtual reality helicopter tour.
Credit: Courtesy GE

While virtual reality has been used primarily for consumer applications such as video games and movies, some business-to-business marketers are beginning to test the waters with VR in industries including manufacturing, architecture, construction and hospitals.

Advances in technology that make VR more accessible to users, such as Samsung Gear VR, as well as investment from big players such as Facebook -- which acquired Oculus Rift last year -- are giving b-to-b marketers new ways to demo big, complex equipment to buyers in settings from live events to individual sales calls.

"Virtual reality is another part of the puzzle for us in terms of opening up the world of GE and doing it through visual storytelling," said Katrina Craigwell, director-global content and programming at GE. "The more we can show rather than tell, the better we do."

GE rolled out its first virtual-reality demonstration last November when it unveiled a $500 million research facility in Rio de Janeiro. At the Brazil Technology Center, GE works with customers including BG Group, Petrobras and Statoil to solve engineering challenges such as drilling 40,000-foot wells offshore and processing oil and gas 10,000 feet below sea level.

"These are complex stories," Ms. Craigwell said. "VR is a very powerful tool to help tell them."

To showcase its oil and gas exploration and processing equipment, GE partnered with Kite and Lightning, a Los Angeles-based virtual-reality company, to build VR stations that take users on a simulated journey in a deep-sea submarine. The VR stations, which include a "rumble seat" and headset, let users experience the motion of traveling to the ocean floor to see GE's equipment at work, as well as visualize future applications of technology.

"Virtual reality allows us to take researchers, operators and customers into a world they couldn't experience normally," Ms. Craigwell said.

Since then, GE has taken its VR stations to events including its oil and gas annual investors' meeting in Florence, Italy, in February, and the Offshore Technology Conference in Houston in May.

With Samsung Milk VR, GE has created virtual-reality demonstrations that let users experience being inside a huge power generator or flying in a helicopter over a clean-burning locomotive. Users wear Samsung Gear VR headsets and snap a Galaxy Note 4 smartphone into the headset to view content that is available online on the Samsung Milk VR channel.

"Over the last few weeks, we've been rolling out more and more content on Samsung Milk, and also uploading it to the Oculus Share platform," Ms. Craigwell said. "In a world where it's hard to get someone's attention for 30 seconds, now we have someone for five to 10 minutes."

Other b-to-b industries that are beginning to use virtual reality for marketing include architecture, construction and pharmaceutical manufacturing.

"Architects are continuously doing visualizations and renderings in an attempt to gain work -- virtual-reality technology aligns perfectly with that," said Thomas Hirschmann, partner at The Third Fate, a virtual-reality design studio that opened a b-to-b practice last month. The practice is aimed primarily at architects and businesses that need to create renderings of spaces.

"Architecture isn't like procuring a photocopier," Mr. Hirschmann said. "There are often multiple stakeholders across multiple departments, and even across the community. There is the ability with VR to help pass on your concept not only to the client, but to get stakeholder engagement."

The Third Fate uses a variety of platforms, from Oculus Rift to Google Cardboard, to create VR renderings of architectural projects, giving users the ability to walk through the designed spaces and experience them in 360 degrees.

"A render in architecture always looks a little fake -- or a lot fake," Mr. Hirschmann said. "Virtual reality allows people to have a better understanding of things like scale, movement and flows."

Virtual reality is also being used to design spaces for manufacturing facilities, hospitals and other building environments.

"The value proposition of VR is for massively sized products that are difficult to communicate or have a very costly infrastructure setup, where the only way to cost-effectively bring the final feel to the customer is through virtual reality," said Peter Schlueer, president of WorldViz, a virtual-reality software company based in Santa Barbara, Calif.

WorldViz has worked with clients such as Boeing to help it design airplanes; Stanford University, for which it designed a virtual-reality human interaction lab; and a large pharmaceutical manufacturer, which it declined to name for confidentiality purposes.

"Pharmaceutical manufacturers need massive packaging machines, and those machines cost millions of dollars," Mr. Schlueer said. "Buyers need to be able to experience and see their own future factory layout."

WorldViz has also worked with Turner Construction Co., which builds hospitals, schools and other commercial projects.

"When designing a hospital building, you need to get signoffs from future stakeholders, including doctors and nurses," Mr. Schlueer said. "To do all that, you can do usability testing in virtual reality."