BlackBerry's Turnaround: From Losing $1.2 Billion a Quarter To Profitability

Device Maker and Agency Discuss 'Dramatic Shift' in Relaunching B-to-B Brand
READ THIS NEXT
BtoB Marketers: Are You Mobile Yet? 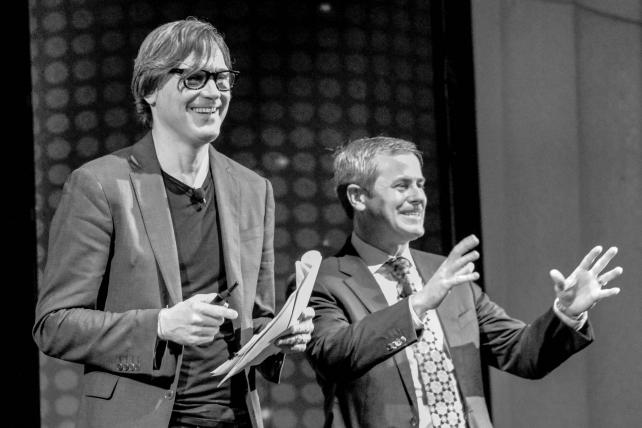 In a joint presentation last week at BMA15, Mark Wilson, senior VP-marketing at BlackBerry, and Christoph Becker, CEO and chief creative officer at Gyro, BlackBerry's agency, presented a case study on the rebranding effort and the challenges they faced.

"When I joined the company 18 months ago, we were focused on b-to-c and we were losing about $1.2 billion a quarter, which is not really a sustainable strategy," Mr. Wilson said during the presentation. "We've had a dramatic shift in our strategy over the last 18 months."

Working with Gyro, BlackBerry set out to regain the b-to-b smartphone market it once dominated with a campaign around the launch of the BlackBerry Passport, a five-inch square-screen handheld device aimed at business professionals.

The campaign, "Work Wide," launched in September and cast BlackBerry as a serious business tool, offering security, mobility and connectivity through the internet of things. In one video, which showed consumers using handheld devices to play games, competitive smartphones were portrayed as toys, not serious business tools. In the first week of the launch, BlackBerry sold over 200,000 Passport devices.

In the following interview, Mr. Wilson and Mr. Becker discuss what made the rebranding effort successful and what's next for BlackBerry.

Advertising Age: How do you measure progress on your turnaround?

Mr. Wilson: We have a two-year plan for the turnaround, and we have been at this for about year. In terms of measurement, it is all about revenue and margins. Are we creating value for our customers and shareholders? Ultimately, it is all about, 'Do people want our product?' We are realizing that on a quarterly basis, and we have been profitable the last couple of quarters [for its fourth fiscal quarter ended Feb. 28, BlackBerry reported net profit of $28 million, compared with a year-earlier loss of $148 million].

Another measure is the Net Promoter Score. Passport now has the highest NPS in the history of BlackBerry. If you can get a high NPS, it can really work well for your brand.

Ad Age: What made the rebrand successful?

Mr. Wilson: BlackBerry brought in John Chen [executive chairman and CEO], and he brought on a new leadership team [in November 2013]. We had to move insanely fast. All of this happened in months. We were working with a great agency partner and they were up for it. Collaboration had a lot to do with it.

Mr. Becker: There were two factors: Fun and trust. We had so many edits coming out, and we had to turn them around quickly. BlackBerry is a challenger brand, and we are a challenger agency, so it worked well. Who doesn't want to bring back an iconic brand?

Ad Age: What are you top priorities as the turnaround continues?

Mr. Wilson: Security and privacy continue to be a core focus for us, as well as what we're doing with the internet of things, software and services.

Mr. Becker: Our job is to regain pride for BlackBerry inside the company and among its core audience of power professionals.

Ad Age: Which media are you using to tell your story?

Mr. Becker: We want to make the message as relevant as possible to the target audience. So we are using online, mobile, sponsorships, events -- looking at how we can do all this without a huge budget.

Mr. Wilson: When I came on board, we cut our social media budget by 98%, but we have seen our [content] output double since then. One of the things we did was bring on brand journalists to help drive a thought leadership program. This is all about being frugal, and it has worked.

Ad Age: What's next in terms of advertising and marketing?

Mr. Wilson: We will continue to go after the verticals we are in -- health care, financial services, professional services, etc. -- with more executions. We really believe the message 'It's not a toy' is resonating with our audience. We want to continue that momentum in the marketplace.

Mr. Becker: There is nothing better than being seriously productive in your job, and only BlackBerry was born to deliver that. The goal is to continue to deliver and dial up that message on a global basis.