Data Backup Company Gets Over 650% ROI with 'Atari' Campaign 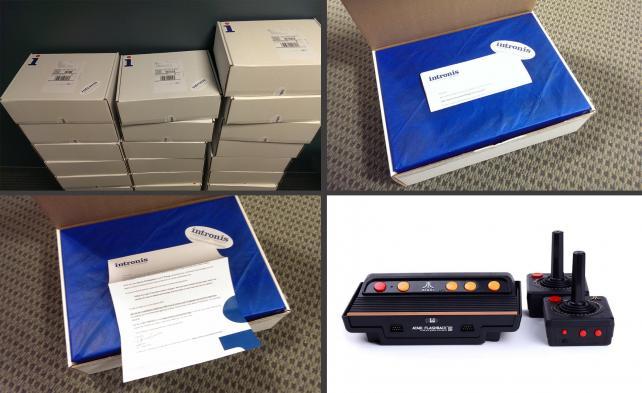 Intronis, which provides cloud-based data protection services to small businesses, got dramatic results with a direct-mail campaign in which it sent its target audience Atari game players.

The campaign was created in-house at the 12-year-old company, which competes with larger players such as Google Cloud and EMC's Mozy data backup and protection services.

Intronis currently serves about 50,000 small-business customers, and it sells to these end customers through a network of about 2,000 managed IT service providers.

"We wanted to reach the larger IT service providers who are looking to get the most value out of our product," said Aaron Dun, CMO at Intronis.

"The traditional email and calling cadence wasn't really having the desired effect among our core set of targets, so we started looking for different ways to reach out and engage with that audience and make them stop and say, 'We need to talk to these guys at Intronis.'"

So Intronis' marketing team held a brainstorming session to kick around ideas for a campaign that would engage the top technology buyers at IT service provider companies -- with titles ranging from president to director of technology.

"Pretty much everyone in the room had had a bad experience with direct mail," Mr. Dun said. "We pulled together what worked really well and what wouldn't work."

The strategy of the campaign was to send out two pieces of direct mail: The first piece would be designed to hook the attention of the target audience, with the promise of getting something else of value if they engaged with Intronis.

"We were adamant that the first thing would have real value -- not a remote-control helicopter without the remote, or an iPad cover without the iPad," Mr. Dun said.

The team considered the demographics of the IT buyer audience -- mostly males 30 to 50 years old, who liked gadgets.

One of the marketing directors suggested an Atari game player.

"We realized this was a game that would resonate with the target audience," Mr. Dun said. "We thought the nostalgia factor would really play, plus they have remade it, and instead of cartridges, it now has a hard drive."

So Intronis came up with the theme, "Not all technology is this retro cool," and the message that it may be time to upgrade the company's data backup and storage. If users agreed to spend 30 minutes on the phone with an Intronis salesperson, they would be given an upgrade to a free gaming platform, with a choice of an XBox, Wii or Sony Playstation.

The campaign launched in March 2014. In the first wave, Intronis sent out 50 Ataris, and it got meetings with 25 recipients -- a 50% conversion rate.

Since then it has sent out more than 20 waves, continuously testing different variables such as the messaging, packaging, day of week and number of pieces sent in each wave.

To date, the campaign has had an average 35% conversion rate, with an ROI of more than 650%, Mr. Dun said. The ROI was calculated by taking the actual contract value of the deals generated from the campaign and dividing that by the total cost of the campaign, including the cost of the Atari game players, boxes, batteries, shipping costs, upgrades to new game players and people costs.

Here are some of the lessons Intronis learned from this direct-mail campaign:

1. Send out a relatively small number of pieces in each wave. "That is the smartest thing we've done," Mr. Dun said. With just 50 units sent out in the first wave, Intronis was able to order the Atari players directly from Amazon. If it had gone much higher, it would have had to use a fulfillment house, with added costs. "If we had tried to pull together a first wave of several hundred, the thing would have cratered," he said.

2. The packaging is important. "We put a tremendous amount of thought into the experience of the box -- how it was received, the messaging and how people unpacked it," Mr. Dun said. Intronis found a box that opened in only one direction, and it branded the top and covered the player with tissue paper, so recipients would see the brand message and cover letter before seeing what was inside.

3. Monday is the best day to ship. Intronis tested shipping on different days and different times of day, and learned that Monday afternoon is the ideal time to ship, both in terms of when the items are delivered to recipients and also for the internal PR benefit.

"We were able to generate a lot of internal excitement on Monday afternoons when we would walk up the stairs with the newest stack of Ataris ready to ship," Mr. Dun said.