Best Practices: How to Launch a Product with a Teaser Campaign and VR Demo | Ad Age
Skip to main content

Best Practices: How to Launch a Product with a Teaser Campaign and VR Demo

Key Technology Exceeds Lead Generation Goals With Launch Campaign
READ THIS NEXT
BtoB Marketers: Are You Mobile Yet? 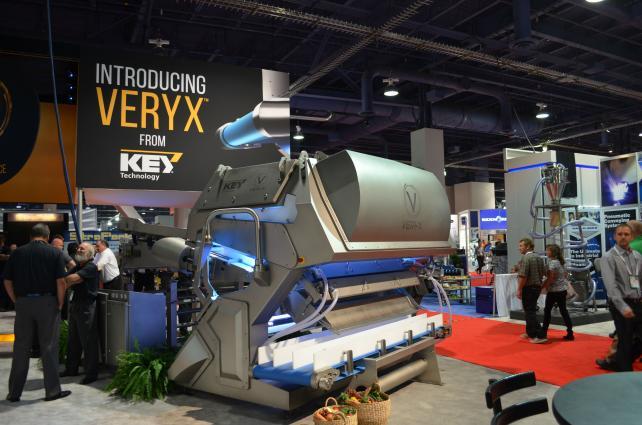 Key Technology, which was founded in 1948 and manufactures equipment for the food processing industry, was launching a new sorting machine it described as "revolutionary," and it needed to make a big splash.

The product, a digital sorting platform that is used to process foods including dried fruits, potato chips and nuts, had been in development for about five years and was Key's first major product introduction in a very long time, said Anita Funk, marketing communications manager at the company.

"This has been positioned internally as the most important product introduction in our company's history," she said. "Key had been seen as falling behind a bit in technology and not coming out with new product development as rapidly as our competitors. It was very important to release the product and get the news out to our customers about what we had been doing behind the scenes."

To do this, Key selected b-to-b agency SteinIAS about one year ago to develop a fully integrated campaign, including the product name, identity, messaging, launch campaign and sales enablement tools.

"As the relationship developed, we began to understand how revolutionary the technology they had created was and what it would do for the food processing industry on a global basis -- not just an evolution but a revolution from a tech perspective, like going from a flip-phone to a smartphone," said Ted Kohnen, managing director of SteinIAS San Francisco.

SteinIAS came up with the product name Veryx -- which has its roots in the Latin word for "true" and the Spanish word for "to see" -- and created a teaser campaign to introduce the product at the food processing industry's largest trade show, Pack Expo, which was held in Las Vegas at the end of September.

The campaign, called "The New Standard of Excellence," did not disclose the product name but was intended to create excitement around the product launch and drive traffic to Key Technology's booth at Pack Expo, as well as act as a lead generation tool.

Print and online ads, as well as emails, drove users to a landing page with a countdown clock and the ability to sign up and receive information about the product as soon as it was announced.

The product was officially launched on Sept. 28 at the Pack Expo show, and as part of the event, SteinIAS created a virtual reality demo of the Veryx product, which simulated being inside the sorting machine.

"We wanted to create a way to let users get under the hood and see what's in there," said Michael Ruby, VP-executive creative director at SteinIAS San Francisco. "We created a 360-degree video using VR technology that let users go through the sorter as if they were a green bean."

In the VR demo, users can experience going through the sorting machine and see other "green beans" around them -- from good beans to bad beans to foreign objects such as leaves, twigs and even nuts and bolts. Users can experience some of the advanced features such as three-way sorting and foreign-object detection.

The VR experience was available online, as well as at the event with Homido VR glasses and software.

"Visually, we wanted to take this incredible piece of sorting tech and display it almost the same way as a high-performance vehicle, so it looks like the sexiest sorting platform you've ever seen," Mr. Ruby said.

So far, the campaign has been extremely successful, Ms. Funk said. "We had a record number of leads on day one of Pack Expo, which tied directly back to the launch campaign. For the whole show, our leads were about 25% higher than the average leads this event historically delivers."

Within the first two weeks of the campaign, Key Technology generated two-thirds the total number of leads it had projected for the six-month duration of the campaign.

Here are some of the best practices that made the campaign successful:

1. Develop a teaser campaign with an element of mystery. "We hinted that something big was coming, but we didn't include the name of the product," Ms. Funk said. "This was somewhat mysterious and made people curious about what was coming from Key. It really worked well for creating an almost movie-premiere type of engagement with people."

2. Be aggressive across multiple channels. "We knew from research that competitors would look at it very closely. We needed to come out aggressively across all channels -- digital, rich media, print, email, search, video, a white paper and the virtual reality experience," Mr. Kohnen said. "Some brands can launch a product with advertising and a piece of content. We knew to be successful right out of the gate, we had to be aggressive across multiple channels, from creating experiences to the media placement to the website."

3. Do something radically different. "From a visual standpoint, this is so radically different from anything in the market, in the competitive set and at Pack Expo," Mr. Ruby said. "They gave us permission to let this be awesome. We were allowed to be proud and go bold."

Ms. Funk added, "Our industry tends to be very conservative and not highly creative when it comes to marketing. In the trade pubs, the ads are kind of catalog-like -- a lot of stainless steel equipment and pictures of food processed in that equipment. We really wanted to step outside the box with this campaign."