LinkedIn and Left Out: Why B-to-B Can't Afford Closed Platforms

LinkedIn Should Share Business Audience Data with Marketers to Enhance Programmatic Buying
READ THIS NEXT
BtoB Marketers: Are You Mobile Yet?

If you're looking for a job or to hire an employee, LinkedIn is the leader by a mile. But LinkedIn is evolving. The professional social network is pivoting toward digital advertising and lead gen with the recent launch of a digital ad network. This has b-to-b marketers excited, and for good reason. LinkedIn's arrival in the space represents a strong move that could influence the programmatic revolution in a big way. But before b-to-b marketers shift the lion's share of their budgets to LinkedIn, they should ask if LinkedIn's closed approach is best.

With a massive user base and deep data to draw on, LinkedIn could be a hero in a strong field of b-to-b data companies that already includes standouts like Hoovers, Salesgenie, and Marketo. LinkedIn, more than any other company, has the potential to marshal the b-to-b programmatic market, return premiums to publishers, and deliver precision and collaboration to targeting. On paper, LinkedIn has everything it needs to succeed in this space, but in practice there are pitfalls ahead, because lasting revolutions in technology cannot live inside a silo.

When LinkedIn bought Bizo, a b-to-b ad technology and data firm, one of its first moves was to discontinue Bizo Data Solutions, which provided business data to publishers and marketers. And while LinkedIn now provides the ability to market outside its network across the web, marketers aren't able to layer first-party data on top of LinkedIn's data, which limits the ability to self-initiate traditional programmatic media buys.

Open versus closed and the problem of reach

Open systems have unlimited reach. Closed systems trade unlimited reach for a walled garden, on the theory that what grows inside the garden will be of a higher quality and produce a better yield. This is one of the longest-running debates in tech, because each new innovation raises the question anew. But ultimately, as Harvard Business School Professor Clayton M. Christensen observed when talking about the disruptive potential of the iPhone, open technology (or as he calls it, "modular architecture") always wins in the long run.

"The transition from proprietary architecture to open modular architecture just happens over and over again," Christensen said in a Forbes interview.

Microsoft's open approach gave PCs market share over Apple. Likewise, Google's commitment to open technology is making the Android operating system vastly more popular than Apple's iOS, even if people line up whenever a new iPhone comes out. And of course, the web itself thrives on open systems. In each case, there's an undeniable link between openness and a technology's capacity to revolutionize the world.

Unfortunately, LinkedIn finds itself on the wrong side of the open technology question, because like all social networks, LinkedIn is a closed system. In the context of social networking, a walled garden isn't necessarily a bad thing because exclusivity and segmentation are, for better or worse, how people organize themselves into groups and how social networks provide utility to users. But there's already evidence that LinkedIn is extending that walled garden approach to marketing, and that's a mistake.

In the end, the introduction of LinkedIn's b-to-b advertising model provides huge lift to the underserved b-to-b programmatic space; however, it will be most beneficial to marketers when LinkedIn shares audience data that propels the programmatic revolution forward. 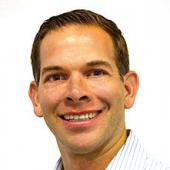 John Merris
John Merris is VP-programmatic at MultiView, a b-to-b digital marketing company.
View all articles by this author