'Hyper-Mega' Campaign Targets Business Commuters
READ THIS NEXT
BtoB Marketers: Are You Mobile Yet?

In an effort to reach its target audience of influential business executives in New York City, Thomson Reuters is taking over Grand Central Station with a month-long campaign.

The takeover, which begins today, includes billboards, videos, mobile and social, and is part of Thomson Reuters' "The Answer Company" campaign, which launched last year. The push was created by TBWA/Chiat/Day, New York.

"The Grand Central Station takeover is the first execution we have developed, in conjunction with TBWA, that we call 'hyper-mega,'" said Stephen Sonnenfeld, VP-advertising and brand integration at Thomson Reuters.

"We are delivering a very concentrated message to a very targeted group of people within a very specific geographic environment," he said. "This makes the best use of our media budget and puts our presence directly in front of the people who are most important to us."

Those people are business professionals who work in the four core industries Thomson Reuters serves: legal, risk management, tax and accounting, and media.

"The core of our brand challenge is to really get people to understand the scope of what we do as a company," Mr. Sonnenfeld said. "We have a fair amount of people who may know us well in a particular industry, but may not know what we do in other industries."

Thomson Reuters is taking over all of Grand Central Station's ad inventory for the month of September, and will blanket the terminal, tunnels and train station with billboards that ask questions "that are keeping our target up at night," Mr. Sonnenfeld said.

For example, one billboard -- targeted at media professionals -- shows a sea of photographers with the question, "How can you discern between what's trending and what's true?"

Another ad, targeted at lawyers, asks the question, "How will a historic ruling alter the needs of your clients?"

"We want to ask the questions of the age," said Rob Schwartz, CEO of TBWA/Chiat/Day New York. "If you are a financial person, how can an investment bank work more like a tech startup? If you are a lawyer, how can you spend more time building your case instead of looking for it? We want to create a sense of empathy, and this empathy creates the beginning of trust. By raising these questions, Thomson Reuters becomes the de facto place to find the answers."

In addition to placing ads throughout Grand Central Station, Thomson Reuters has also "geofenced" the terminal and the immediate area surrounding it and will send targeted content to mobile users via social.

"We are buying standard mobile display on a very targeted basis against commuters on daypart schedules, for the morning and evening commute," Mr. Sonnenfeld said. "We are pushing content, including 60- to 90-second videos we call 'orange papers,' which is a really great way to present thought leadership over mobile and social. We are trying to use the complete commuting experience to make the Grand Central takeover even more impactful."

"With these 'orange papers,' we want to flip the idea of the standard 'white paper' on its head, and make it a little more fun and easier to consume," Mr. Schwartz said, noting that "orange is the dominant sub-brand color."

Within a 10-block radius of Grand Central Station are some of the most influential businesses in the world, including four of the top global banks, three of the top investment firms, five of the largest law firms, eight major media outlets, and all of the "Big Four" accounting firm headquarters.

"The impact on these people will be fantastic," Mr. Sonnenfeld said.

"One thing that is very smart about the Grand Central takeover campaign is that it is both analog and digital," Mr. Schwartz added. "Whether you enter the experience with digital first and then look at analog, or look at analog first and then see digital, this is an experiece that evolves traditional out-of-home."

The campaign budget was not disclosed. 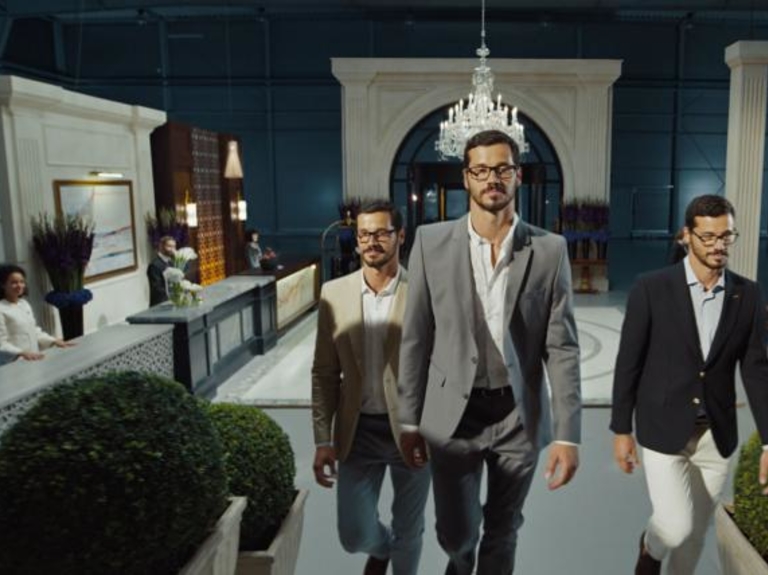