Microsoft Was the No. 1 Advertiser, Followed by AT&T and Verizon
READ THIS NEXT
BtoB Marketers: Are You Mobile Yet? 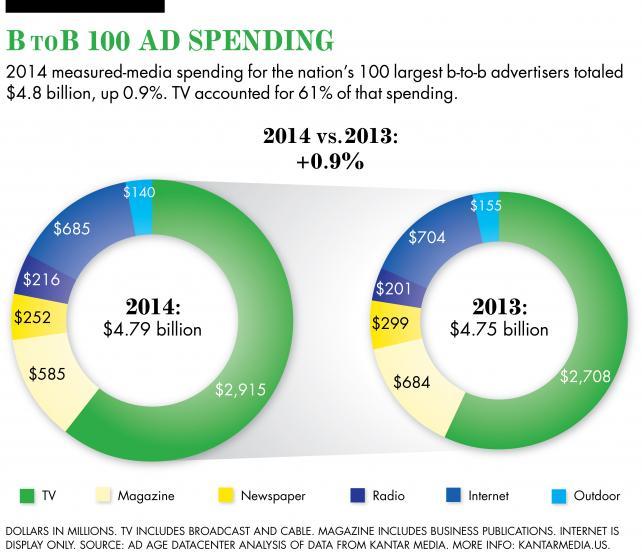 The 100 largest business-to-business advertisers spent an estimated $4.8 billion on U.S. b-to-b ads last year, up 0.9% from 2013, according to Ad Age Datacenter's analysis of measured-media spending from Kantar Media.

Microsoft launched an integrated campaign last year pitting its mobile devices -- including the Lumia 635 smartphone from Nokia (which Microsoft owns) and its Surface Pro 3 tablet -- squarely against Apple's iPhone and MacBook Air.

"We are a challenger brand in the mobile category," said Kathleen Hall, general manager-global and brand marketing at Microsoft, in an interview with Ad Age last year about the integrated ad campaign.

The campaign was created by M:United, a new agency formed after Microsoft shifted its media and creative businesses to Interpublic Group and DentsuAegis last year.

Last year, AT&T rolled out a brand platform, "Mobilizing Your World," to show how its mobile network helps businesses and consumers succeed. The campaign launched with a 60-second TV spot, created by BBDO New York, showing how AT&T technologies allow people to work seamlessly together.

The No. 3 b-to-b advertiser last year was Verizon Communications, which spent an estimated $168.6 million on b-to-b ads, down 8.8% from 2013. Verizon launched a TV campaign, created by McGarryBowen, showing how business people and consumers can be heroes by using Verizon's XLTE mobility network.