Ads Poke Fun at 'Captive' Insurance Agents Who Don't Offer Freedom of Choice
READ THIS NEXT
BtoB Marketers: Are You Mobile Yet?

Trusted Choice, a network of independent insurance agents, this month is rolling out a new ad campaign aimed at small and medium businesses, designed to show the freedom of choice independent agents can offer clients. 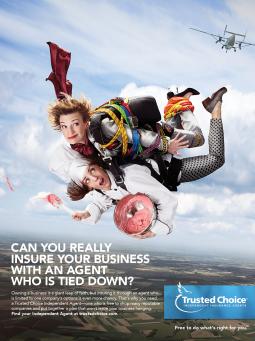 Trusted Choice is a brand of the Independent Insurance Agents and Brokers of America, and it includes more than 140,000 independent insurance agents who serve consumers and business customers.

"As an independent-agent channel, a singular brand that can represent that channel is vitally important," said Kevin Brandt, director of operations and marketing at Trusted Choice.

He noted that there are three main channels for selling insurance: direct channels, such as Geico, which sell directly to consumers and businesses; "captive" insurance agents, who work for insurance companies such as State Farm or Farmers Insurance and represent only their company's insurance products; and independent agents, who represent multiple brands of insurance.

"This campaign is an offensive move to help independent agents continue to thrive in the commercial insurance space," Mr. Brandt said.

The campaign, which has the tagline "Free to do what's right for you," includes print, online, radio, out-of-home and direct mail, and was created by Marc USA. The budget was undisclosed.

"As we target small to medium business owners, this campaign is based on the idea that business owners have already taken a leap of faith by starting their own business," said Joe Burke, executive creative director at Marc USA, Chicago. "Choosing the wrong agent to help them protect it is taking a risk they never imagined. In each ad, the business owner is putting his business at risk by using a captive agent."

In one execution called "Skydive," an insurance agent is wrapped up in a parachute cord and is unable to help a chef as they are free-falling through the sky. The headline reads, "Can you really insure your business with an agent who is tied down?"

In another execution called "Gym," an insurance agent is tied up in cords at the gym and can't help his client, a general contractor, who is trying to lift weights. The headline reads, "Is your insurance agent free to do what's right for your business?"

"In each of these ads we tried to capture -- with the image and message --the attention of the audience and disrupt the way they think about their current captive agent." Mr. Burke said. "Most small to medium business owners assume their current agent has freedom to do what's right for them. The plan is to grab their attention and tell them it is not the case."

Print ads are running in local newspapers and business magazines and online ads are running on sites including Facebook, Forbes and through ad networks. The campaign also includes radio spots, out-of-home ads in select markets and direct mail.