It's a Moisturizer! It's a Furniture Polish! It's a Dog Treat! | Ad Age
Skip to main content

It's a Moisturizer! It's a Furniture Polish! It's a Dog Treat!

Can coconut oil be the next coconut water? Vita Coco is betting it can – and the bet has little to do with using it as a food product. 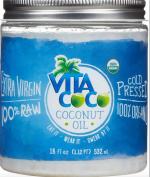 The brand that dominates the fast-growing coconut water business is turning its attention to coconut oil, mainly as a skincare and hair-care product. Citing company research, Vita Coco VP-Marketing Charles van Es estimates U.S. coconut oil sales at around half the size of the coconut water category (pegged at $400 million last year per Euromonitor) and growing 25% annually, with only about a third of that consumption for food. Vita Coco research suggests another third of consumption is for skincare, and another third for hair care.

Last week, the brand made its biggest foray yet into marketing behind its year-old entry into coconut oil, enlisting model Chrissy Teigen on Snapchat, wearing an animated coconut bikini top and talking about using the product as a moisturizer, makeup remover, furniture polish, diaper-rash cream for her two-month-old daughter Luna, dog treat and more conventionally as cooking oil and butter substitute.

IRI doesn't track supermarket sales of coconut oil, and the U.S. Department of Agriculture pegs its growth more conservatively at up 4% last year by volume, albeit up 43% since 2004. But the growing appearance of coconut oil everywhere from club stores to natural food stores has Mr. van Es convinced it's a big growth market as consumers turn to it as a natural beauty product.

Vita Coco is only about a $2 million brand in coconut oil, vs. $250 million in coconut water, per Euromonitor.

"But we think there's a huge opportunity to go in and disrupt this category with more consumer education," he said. "There is an actual product story to tell. Over the last decade or so a lot of brands and categories that have come up are products that have been used other places, like humus or Greek yogurt. As consumers in this country have become more and more educated, they just picked up on the trend."

Market penetration is strongest in southern states and among people from Caribbean or Pacific islands, Mr. van Es said.

Snapchat, like coconut oil, is catching on fast but hard to track, he said. That's because, compared to other social media, its messages are fleeting. But he's begun to notice that Vita Coco's more-measurable impact in other social media starting to dwindle during marketing events, something he attributes to more people sharing on Snapchat.

So even though Ms. Teigen's snaps were fleeting, he said, "we just need to make sure we tell a good story and archive the work in a smart way to use in our other social-media channels."