READ THIS NEXT
Presidential campaign update: Brace yourself for a $300 million fall TV and radio ad blitz 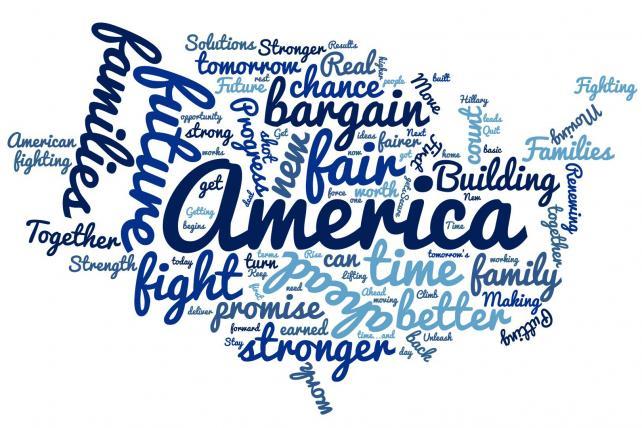 Via an Aug. 18, 2015 email from Oren Shur, the director of paid media at the Clinton campaign, to various other staffers and advisers, a list of potential Clinton campaign slogans. "For the organizing principle/slogan part, BSG put the attached doc together for discussion," Shur wrote to explain an attached Word document; BSG is Benenson Strategy Group. The potential slogans are organized by theme.

A fair shot and a fair deal

Hillary - For Fairness. For Families.

Fairness worth the fight

A fair chance for families

A fair fight for families

A fair chance to get ahead

Fairness for all our families

She's got your back

Your family is her fight

Your family. Her fight

Your future is her fight

Your future. Her fight.

A force for families

A fighting chance for families

A new promise for a new time

A better bargain for a better tomorrow

Get ahead. Stay ahead.

A better bargain. For all.

An America that works for you.

An America built for you.

A new bargain for a stronger America

Time for a better bargain.

Putting America to work for you

Making America work for you

A promise you can count on

Strength you can count on

A stronger America working for you

The ideas we need and the strength to deliver

A stronger America for a new day

For an America that leads

America gets strong when you get ahead

A stronger America one family at a time

Strength for all our families

A new bargain we can count on.

Progress for the rest of us

Theme: In it together

Lifting us up. Moving us forward.

Our Families, Our Future

A future worth fighting for

For your family. For America's future

Theme: It's about you

It's about time…and it's about you.

Because your time is now

Next begins with you

You may have noticed that though our headline is "84 Rejected Clinton Campaign Slogans," 85 slogans appear above. That's because one of them made the cut. Do you know which one? Hint: It's not about you.