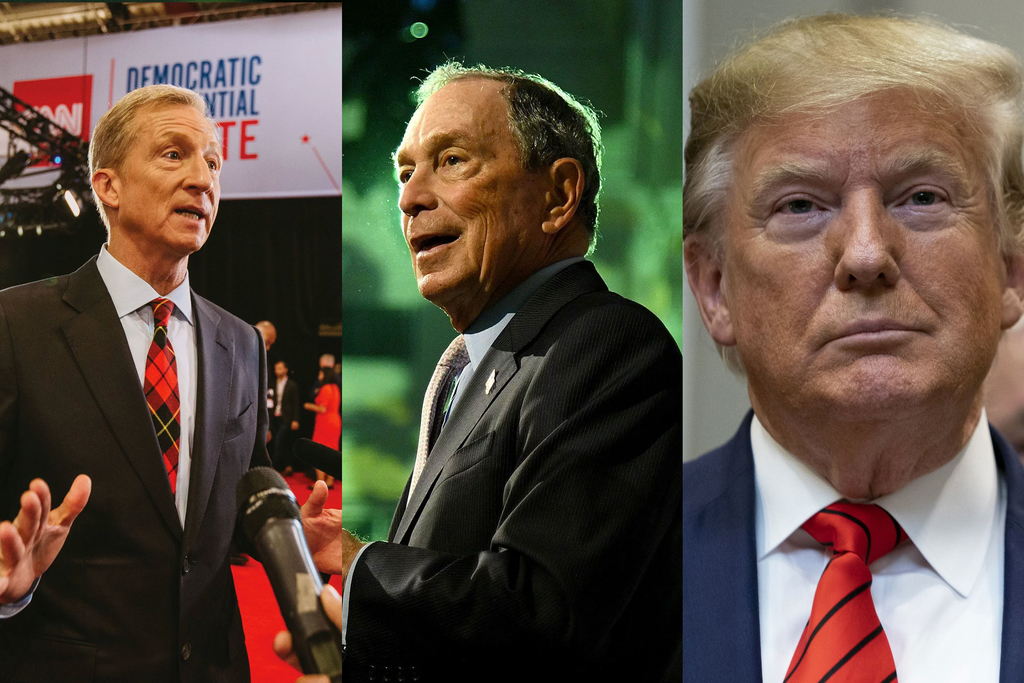 Christmas came early this year for certain media companies, thanks to a couple of unlikely Santa Clauses.

According to the latest Ad Age Datacenter analysis of political ad spending in partnership with Kantar/CMAG, billionaire presidential candidates Tom Steyer and Mike Bloomberg have both surged past the $100-million mark in ad spending across broadcast TV, cable and radio as well as Facebook (the totals throughout this article include advance bookings). Bloomberg’s outlay is all the more astonishing given that he only formally threw his hat in the ring on Nov. 24 (vs. July 9 for Steyer).

To put all that spending in perspective, consider that the current occupant of the White House, President Donald Trump, has spent just over $24.8 million on TV/radio/Facebook, while all the other major candidates—Joe Biden, Elizabeth Warren, Bernie Sanders, etc.—have spent $89.5 million on the same media combined.

So the overall math here is pretty deranged: More than two-thirds of the $345.5 million in total campaign ad outlay tracked by Datacenter is thanks to the spending of a couple of advertising-obsessed rich guys.

Steyer is arguably the better Santa Claus, because he’s really been spreading his wealth far and wide. Unlike Bloomberg and Trump, who have mostly focused on the major broadcast networks and the usual cable-news suspects—while the assorted Democratic candidates have prioritized relatively modest local TV buys in key early states—Steyer has been making big national cable buys on the likes of the History Channel ($2.9 million), HGTV ($2.1 million) and Animal Planet ($1.7 million).

And in case you were wondering, Trump’s campaign has dished out about half a mil to his favorite network, Fox News, but has also (go figure) spent about $200,000 and $300,000 placing ads on, respectively, MSNBC and CNN, both of which he famously detests.

For the record, the bulk of Trump’s Datacenter-tracked campaign ad spending—$17.6 million’s worth—has been on Facebook, where he’s been leveraging the impeachment drama to raise funds from his supporters for his war chest. At some point we expect him to start plowing his Facebook-enabled impeachment windfall into lots and lots of traditional advertising (his total TV and radio outlay right now is just $7.1 million).

National broadcast TV and cable spending by presidential candidate
By network. Dollars in millions.
This table includes only candidates who have spent more than $1 million on national TV/cable advertising and ranks networks on which more than $2 million has been spent or booked. No other network has more than $2 million in spending. Source: TV and radio spending from Kantar/CMAG. Spending by network includes national buys only and excludes local TV spending. Total TV and radio spending includes broadcast TV, local/regional cable and satellite TV, radio and Spanish-language local TV from Jan. 1, 2019, through Election Day (including advance bookings) as of Dec. 17, 2019. Figures for TV and radio include spending for candidates who have dropped out of the race for president. The overall total for TV and radio includes ad spending by PACs and advocacy groups not neccessarily affiliated with a candidate or opposed to certain candidates. Figures for Tom Steyer include spending for Need to Impeach. Facebook ad spending from Facebook for Jan. 1, 2019, through Dec. 16, 2019. Facebook spending includes only ads specifically associated with the candidate. Total Facebook spending excludes candidates who have dropped out of the race. Numbers rounded.