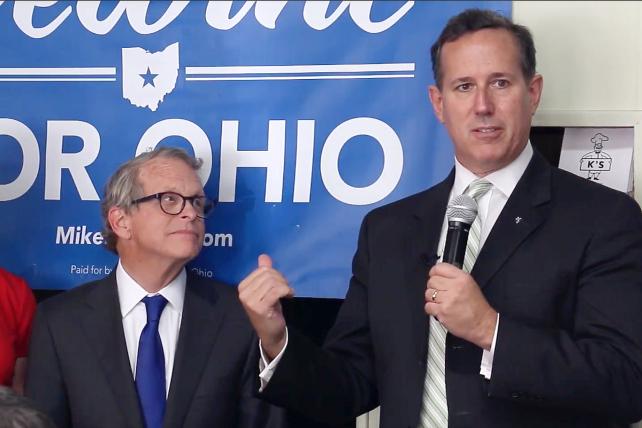 Floridians are awash in campaign ads: TV and radio spending on the races for the state's governorship and just one of its U.S. Senate seats have hit a combined quarter billion dollars, an Ad Age Datacenter analysis revealed last week. That astonishing figure includes spending by not only the candidates (including those who dropped out after losing in the primaries) but by various groups supporting them (e.g., PACs).

This week we're offering a small consolation to Florida: For the moment, political ad spending in the state doesn't seem to be increasing much.

Ohio residents, meanwhile, are not so lucky—unless they happen to sell TV or radio ads for a living.

Over eight days late in this campaign season, Sept. 18 to 26, Ohio saw the biggest jump in TV/radio ad spending, including advance bookings through Election Day.

In that short window, Ohio Republican gubernatorial candidate Mike DeWine and his supporters spent $14 million on new TV/radio ad buys, bringing their total so far to $25.7 million. His Democratic opponent, Richard Cordray, along with his allies, spent another $2.2 million, pushing their total to $10.8 million.

Our chart below details other battlegrounds with rapidly rising spending—but none comes close to Ohio.

Ohio is, of course, a swing state. Bellwether races like this one are magnets for campaign donations from across the nation. Exacerbating the drama: DeWine and Cordray have battled before (DeWine edged Cordray in the 2010 contest for state attorney general) and neither man has the incumbent's edge (current Republican Gov. John Kasich is term-limited).

And so Ohio voters are being subjected to attack ads of increasing intensity and frequency.

"Drug dealer: released. Human trafficker: released. Child pornographer: released. If Richard Cordray gets his way, criminals like these could be released early." That's the voice-over from a recent DeWine TV ad.