City Spotlight: As Political Convention Hosts, Cleveland, Philadelphia Are Ready for Their Close-Ups

Cities Look to Summer Influx of Politicos and Media as a Chance to Tell Their Stories
READ THIS NEXT
Watch Caitlyn Jenner’s epic, substance-free first campaign ad, ‘Caitlyn For California’

Some 50,000 politically minded people and the media will pilgrimage to the two cities, but what will they find? Much more than Cleveland's blue-collar vibe and Rock and Roll Hall of Fame attraction or Philadelphia's historical charm and cheesesteak rivalries if organizers and hometown proponents have their way.

'Scrappy' ad scene
"We definitely see this as an opportunity to reshape Cleveland's reputation. We think about Cleveland as a great combination of sophistication and grit," said Colette Jones, VP-marketing for Destination Cleveland, which is working with the RNC host committee on marketing and public relations.

More than 80 local marketing and communications professionals from ad agencies, PR groups, internal PR staff at large corporations, civic PR people and the media are working on committees for the event, she said.

Cleveland, a Midwestern mid-market city with a population of about 390,000, has been known for its struggles as an industrial city through the recession, but is now in the midst of an economic rebound aided by tourism, healthcare, hospitality construction and a booming arts and foodie scene, Ms. Jones said. 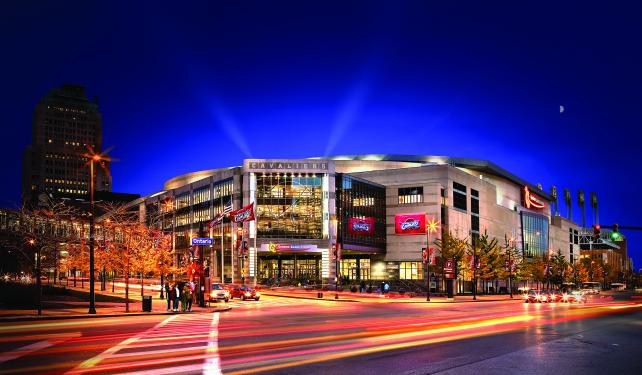 The convention will be held at Quicken Loans Arena, home to basketball's Cleveland Cavaliers; the city is one of the smallest markets to have NBA, NFL and MLB teams.

Several large marketers are also based in Cleveland, including Sherwin-Williams, American Greetings and Progressive. Tim Brokaw, co-CEO of independent ad agency Brokaw, described the local advertising scene as "scrappy," with lots of tech companies and new startups that go hand in hand with the overall rise of millennials who call downtown Cleveland home, he said.

Outdoor advertising is seeing a "huge uptick" thanks to the RNC, Mr. Brokaw said, as local companies and others vie for ad attention in the national spotlight. One of Brokaw's clients, Great Lakes Brewing Co., is brewing a limited-edition ale, yet to be named, in honor of RNC week.

Restaurants and downtown haunts close to the arena are being snapped up for sublet. Twitter rented out the hip downtown restaurant Greenhouse Tavern as its weeklong headquarters. Well-known chef Michael Symon's two restaurants are already booked by private groups, as are many others in close proximity to the arena. Mr. Brokaw said his agency has also been approached by a group looking to rent, although he's holding out for now.

More than cheesesteaks
Philadelphia, the fifth-largest city in the U.S. with more than 1.5 million people, faces the daunting prospect of going second—and being decidedly less raucous and more predictable—with legions of tired politicos and media, estimated to account for 20,000 of the overall visitors, coming off the RNC the week before.

"Our current ad campaign says, 'There's more to a legendary city than its legends,' and so our overall goal for the DNC is to help people to fall in love not only with our legends, but with everything that's becoming legend here," said Meryl Levitz, CEO and president of Visit Philadelphia.

Anna Adams-Sarthou, communications director for the Philadelphia DNC host committee, said that means showcasing Philadelphia as much more than cheesesteaks and history. It's working with Visit Philadelphia to highlight neighborhoods, the food scene, world-class museums and the burgeoning tech culture, all of which have changed dramatically since 2000, when the city hosted the RNC.

Ms. Adams-Sarthou said the host committee has purchased outdoor media assets including billboards, pole banners and bus shelters in and around downtown Philadelphia and near the Wells Fargo Center sports arena, where the convention will take place.

Marc Brownstein, CEO and president of Brownstein Group, described the Philly ad scene as divided into those who specialize in pharma and healthcare marketing and those who don't.

"There is strong competition for the general shops—especially creatively. The PR and social media shops are mostly a cottage industry without a large national or global player," he said. "Overall, the business climate is healthy, but needs more homegrown companies with strong growth trajectories, like Comcast."

Both he and Molly Watson, chief operating officer of Tierney, noted the rise of the millennial population as young professionals seek a better quality of life outside of work.

Ms. Watson, who moved to Philadelphia from New York, called her new hometown "the biggest small town out there, but there's no compromise on culture or sophistication or the arts scene."