What Cruz-Out-of-Control Says About Trump's Convention

Who's Really in Charge Here?
READ THIS NEXT
Watch The Lincoln Project’s data-driven viral video, plus a young poet’s instant fame by the numbers: Datacenter Weekly 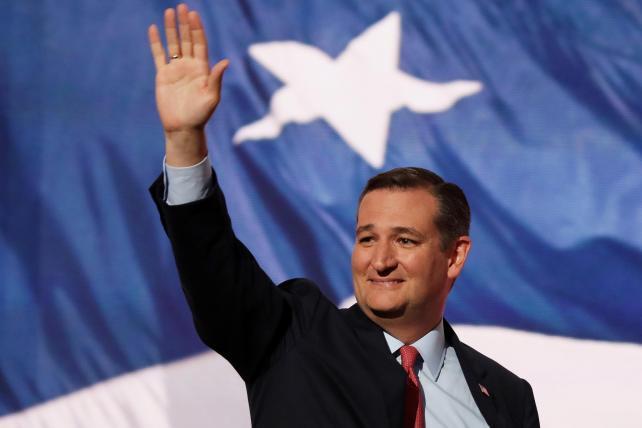 Sen. Ted Cruz, R-TX, waves to the crowd as he walks on stage to deliver his much talked-about speech on the third day of the Republican National Convention on July 20, 2016 at the Quicken Loans Arena in Cleveland.
Credit: Chip Somodevilla/Getty Images

The TV ratings for the Republican National Convention are down (see: "No Bump for Trump as GOP Convention Ratings Plummet"), and it's not exactly a surprise. As a guy who's been watching the RNC this week up-close-and-personal at the Quicken Loans Arena, aka the Q, in Cleveland, I keep on scratching my head over some of the programming decisions made for the Republicans' big infomercial. And unlike you, the home viewer, I can't tune out or click away, so I'm seeing it all.

Wednesday night's Ted Cruz-related fireworks aside (more on that in a moment), the big show put on by reality-TV veteran Donald Trump has often been, to put it charitably, less than compelling.

Take, for instance, Michelle Van Etten, one of the speakers who took the stage during the primetime block. Billed as the head of something called Women In Business For Trump, she is, quite simply, a dreadful speaker who kept on fumbling her lines, misreading the teleprompter and gesticulating entirely out of sync with her words. She came off like the sort of well-meaning moron that Catherine O'Hara would play in a Christopher Guest mockumentary. Oh, and by the way, her business expertise? "Trump backer speaking at RNC, billed as boss of 100,000, employs zero workers," per The Guardian.

Michelle Van Etten is doing an improv act. She went off prompter and can't get it together. #RNCinCLE pic.twitter.com/49pilm8L09

I just tuned in for Michelle Van Etten & damn she is struggling. i actually feel bad for her #RNCinCLE

Or consider Oklahoma oilman and fracking mogul Harold Hamm, another primetime RNC speaker, who is the CEO of Continental Resources and Trump's energy advisor (and a likely cabinet member in a Trump administration). He's 70, like Donald Trump, but unlike Donald Trump, he's really showing his age. He's got a bad, Sumner Redstone-style dye job and a mumbly drawl that occasionally made it sound like he had marbles in his mouth. "Did that guy have a stroke?" I heard someone sitting in the row ahead of me say.

Sitting immediately to my left was Michael Wolff, the USA Today columnist, who happens to be an old friend and former colleague (when I worked at New York magazine, I was the editor of his notorious media column). As with Ted Koppel and Charlie Rose earlier in the week, I ran into Michael by chance in the fenced-in pathway connected to the security-check tents run by the Secret Service.

As Harold Hamm mumbled his way through his remarks, Michael turned to me and said, "Who are these people?! This is primetime!"

"They're all FODs! Friends of Donald," I said. People he probably met on the golf course at some point.

This is Trump's show. The un-telegenic, not-ready-for-primetime speakers that have been taking the stage this week have been taking the stage on Donald Trump's say-so. As The New York Times reported on the eve of the convention, Trump kept on insisting that fight promoter and FOD Don King would make a great RNC speaker. Those around Trump had a hard time talking him out of it, until...

Finally, officials including Reince Priebus, the Republican national chairman, firmly explained to Mr. Trump why Mr. King should not be invited: He once stomped a man to death and was convicted of manslaughter. The party could not associate itself with someone convicted of a felony. Mr. Trump eventually relented.

And so, too, we can blame Donald Trump for the Ted Cruz-troversy later in the evening, which has completely overshadowed what was supposed to be the evening's star-turn (Trump's chosen VP, Mike Pence, taking the stage) and has led to headlines like this today: "Ted Cruz Humiliates Donald Trump, Refuses to Endorse Him at RNC," "Ted Cruz Spoils the Trump-Pence Party" and "Security whisks Heidi Cruz out of convention as crowd boos Ted."

In the Q, the boos directed at Cruz were sustained and jarring, and Trump's surprise arrival in the arena alongside his family in the VIP area read as a rebuff to non-endorser Cruz -- and an attempt at reasserting control. (Later, watching the media endlessly replay it -- which the massive monitors in the arena most certainly did not -- and spin it after the fact, it looked even worse.)

Speaking of control, Trump, in disparaging Cruz on Twitter late Thursday night, also acknowledged that he enabled the Cruz trainwreck:

Wow, Ted Cruz got booed off the stage, didn't honor the pledge! I saw his speech two hours early but let him speak anyway. No big deal!

Since then, the optics have only worsened, with Cruz telling a group of Texas delegates Thursday morning that "I am not in the habit of supporting people who attack my wife and attack my family" and that he wouldn't be "a servile puppy dog" for the Trump campaign.

In other words, the Republican National Convention may technically be Trump's show -- he sure as hell has been calling the shots -- but he's not really in control of it.