Is This the Candidate's Dukakis-in-a-Tank Moment?
READ THIS NEXT
Trump has booked $147 million in upcoming TV campaign ads 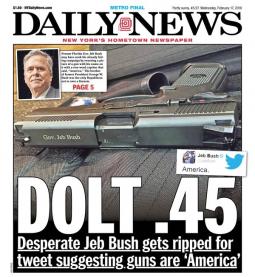 In the wake Mr. Bush's Tuesday afternoon tweet, above ... uh, let's just say that nobody's having it. Defintely not gun-control advocates, like the wits at the Daily News, who are winning the internet this morning with their "Dolt .45" cover. But also definitely not the gun-loving conservatives that Mr. Bush meant to court.

It was supposed to be a simple, powerful message: Having received a FNX-45 pistol with his name engraved on it while visiting a Columbia, S.C., gun manufacturer, Mr. Bush -- or, more likely, one of his nitwit campaign staffers who still doesn't understand how social media works -- decided to tweet a photo of it with a one-word caption: "America."

The problem is that Bush previously was the only Republican presidential candidate to not own a firearm. So showing off his new toy this late in the game, and only after a campaign stop at a gun factory, made his level of pandering seem downright grovel-ish.

The other problem is, well, how social media works. Some prime examples:

I know times are tough @JebBush. But suicide is never the answer! Choose life! #JebCanFixIt https://t.co/lxbB5g2iIu

oh great, Jeb Bush showed us a gun and now according to the rules of drama the Presidential race can't end without it going off

Fun fact: Jeb Bush is named after this gun pic.twitter.com/Ygl9fVRPaC

I think the biggest surprise, for me, about Jeb Bush's gun is that it says "Gov. Jeb Bush" on the barrel and not "point away from face".

Jeb Bush pointing his gun at you would be scary for .000001 seconds before you took it and smacked him with it. https://t.co/BtBGVXd8MG

Jeb bush tweeting a pic of a gun is the political equivalent of saying #masc4masc on Grindr.

oh ffs, who gave this guy a gun? https://t.co/fdIrzRz1RQ

As Politico's Josh King wrote of Michael Dukakis' notorious standing-in-a-tank photo op from the 1988 presidential campaign trail, this is about a candidate "pretending to be something he wasn't and, in the process, making a fool of himself."