The Election Is Anyone's Guess, but the DNC Is Winning the TV Ratings Race | Ad Age
Skip to main content

The Election Is Anyone's Guess, but the DNC Is Winning the TV Ratings Race

Hillary Clinton's Retinue Is a Bigger Draw Than Team Trump 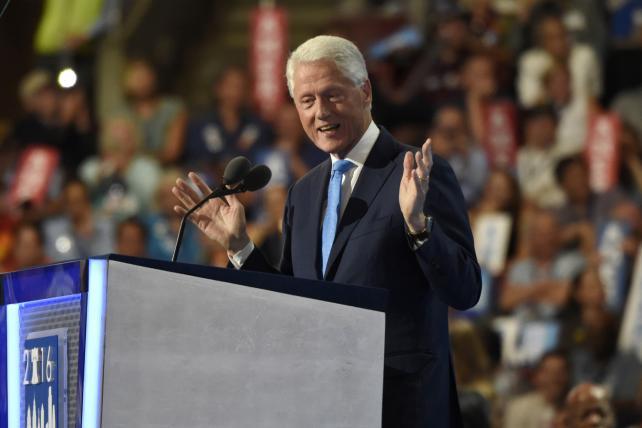 The Democratic National Convention continues to be a bigger draw than its Republican counterpart, as nearly four-and-a-half-million more viewers have tuned in for primetime coverage of this week's dog and pony show.

According to Nielsen live-plus-same-day data, the first two nights of the DNC have delivered an average crowd of 25.3 million viewers across ABC, CBS, NBC, CNN, Fox News Channel and MSNBC, a tally that marks a 21% advantage over the 21 million viewers who watched the opening rounds of the Republican National Convention.

Midway through the four-night event, the DNC is also besting the GOP confab in terms of the number of demographically desirable viewers it is reaching. Thus far, the DNC is averaging 7.9 million adults 25 to 54 years old per night, which translates to a 6.7 rating and represents a 39% lift versus the RNC's 5.68 million/4.8 rating.

As was the case with the RNC, the Dems saw a portion of the TV audience evaporate between the first and second nights. President Bill Clinton, who spoke for the greater part of the 10 p.m. hour, was a slightly less compelling draw than Michelle Obama, falling short of the First Lady's Monday night deliveries by some 955,000 total viewers. Mrs. Obama also out-performed the 42nd POTUS by 698,000 members of the core news demo.

If President Clinton's address didn't attract as quite as many viewers as Mrs. Obama's speech, the DNC declines were far less pronounced than those experienced by the RNC. Total viewership for the second night of Hillary Clinton's party coronation dipped just 4%, with in-demo viewers falling 8%, while the RNC's overall deliveries fell 14% from one night to the next and the number of adults 25 to 54 plummeted 20%.

CNN put together another big night, topping the field with an average draw of 6.11 million viewers, of whom more than one-third (34%, or 2.09 million) were members of the target demo. Through the first two nights of the convention, the resurgent news network is up 59% in total viewers compared to its showing during the 2012 DNC, and has improved 57% in the demo.

CNN is on pace to run the table during the 2016 DNC, averaging 6.2 million total viewers and 2.14 million members of the advertiser-coveted age group. NBC would seem to have a lock on second place (4.79 million/1.83 million), while MSNBC is poised for a third-place finish with an average draw of 4.3 million viewers and 1.31 million in the dollar demo.

ABC is in the middle of the pack with 3.86 million viewers and 1.24 adults 25 to 54, while either CBS or Fox News will have the dubious distinction of finishing in in last place. The networks are in a virtual tie with around 3.1 million total viewers, although CBS currently has a slight edge over Fox News in the demo, drawing 970,000 adults 25 to 54 to FNC's 757,000.

While advertising in live news events tends to skew heavily toward pharmaceutical spots and over-the-counter anodynes, clients are mixing it up a bit with the broadcast portion of the DNC. Along with the inevitable buys from the likes of Pfizer, Bayer (Aleve, MiraFiber) and GlaxoSmithKline (Breo), the network DNC coverage has been supplemented by spots for Subaru, Mazda, E-Trade, Sonic Drive-In, Viking Ocean Cruises and Paramount Pictures' upcoming small-budget U.K. import "Florence Foster Jenkins."

Among the speakers scheduled to address the delegates Wednesday in primetime are Vice President Joe Biden and former New York Mayor Michael Bloomberg. President Barack Obama will cap the night with his endorsement of Ms. Clinton.