Despite the bitter rivalry that 's shaping up between Mitt Romney and, well, every other Republican hoping to be the GOP's presidential nominee, the advertising tone apparently hasn't been as negative as one would expect. According to numbers released by Kantar Media's CMAG, over the past week in South Carolina, 54% of all broadcast-TV ads had a positive tone.

Of course, that leaves a healthy negative rate of 46%. And Newt Gingrich is the target of much of it. "Slightly more than one in five ads (22 %) aired in South Carolina markets over the past week targeted Gingrich," reports CMAG. Here's one example from the Mitt Romney campaign. 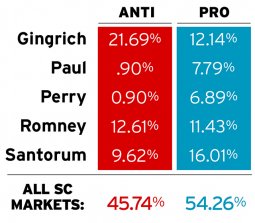 On the other hand, 11% of the ads running in the state painted Romney in a positive light, while 13% tarred him in some fashion. Interestingly, Gingrich had a 12% positive rate, slightly higher than Romney.

And Ron Paul and Rick Perry are mostly being ignored by their opponents.