No Matter How You Look at It, Performance Was Stunning
READ THIS NEXT
Watch Caitlyn Jenner’s epic, substance-free first campaign ad, ‘Caitlyn For California’

TAMPA, Fla. -- Six months ago, Clint Eastwood, a rare Hollywood conservative, was accused of being in the bag for the Obama administration when he starred in a Super Bowl ad seen by many as a paean to the auto-industry bailout. Karl Rove was "offended" by the Chrysler spot. Michelle Malkin offered: "Agh. WTH?" Last night, Mr. Eastwood, a pro-choice, pro-gay marriage GOP supporter, showed up to do a live endorsement for friend and the Republican nominee for president, Mitt Romney.

Now for the awkward part. 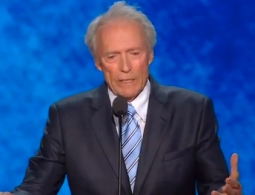 The 82-year-old actor and director, revealed Thursday as the GOP's much-buzzed-about mystery speaker at its national convention, took the stage and delivered one of the strangest political monologues in memory. Well, actually, it was a dialogue. With an empty chair. In which an imaginary President Barack Obama sat.

The speech, which left a large part of the nation scratching its head, was probably more a gift to Buzzfeed than it was the Romney campaign. It was not food for thought from a man whose movies make us think. Nor was it inflaming rhetoric from a cultural icon who commands respect. Instead, it was the political equivalent of a double rainbow. Twitter combusted at the sight of his weirdness, and many memes emerged, including gifs of Mr. Eastwood scolding the chair and "Eastwooding," sort of like planking, only it involves pointing at an empty chair.

With a stammering, stumbling, at times barely audible (in the Forum, at any rate) and presumably unscripted delivery, Mr. Eastwood enacted a surreal act of political theatre, as though Samuel Beckett and Hal Riney reincarnated into the same being, drank a fifth of gin and hopped onto the stage. Motioning toward the empty chair, Mr. Eastwood asked "President Obama" various questions about his record, none of which really made any sense or were even really questions. (A waggish Obama campaign spokesman directed all inquiries to Salvador Dali, the surrealist painter.) From my seat in the stadium, it was clear a TelePrompter that rolled for the other speakers wasn't used for Mr. Eastwood's address.

"I know you were against the war in Iraq, and that 's OK. But you thought the war in Afghanistan was OK. You know, I mean -- you thought that was something worth doing. We didn't check with the Russians to see how did it -- they did there for 10 years."

"And I think it's that time. And I think if you just step aside and Mr. Romney can kind of take over. You can maybe still use a plane. Though maybe a smaller one. Not that big gas guzzler you are going around to colleges and talking about student loans and stuff like that . You are an -- an ecological man. Why would you want to drive that around? OK, well anyway. All right, I'm sorry. I can't do that to myself either."

That last line was presumably a response to Invisible Obama telling Mr. Eastwood what he could do with himself.

The already riled-up crowd here at the Tampa Bay Times Forum ate it up, erupting into applause at various appoints and delighting in the performance's finale. "All right," Mr. Eastwood offered. "I started, you finish it. Go ahead."

The audience screamed in unison: "Make my day!"

This, of course, is a reference to the "Dirty Harry" series, some of the more conservative fare to come out of Hollywood in which Mr. Eastwood starred as Harry Callahan, the .44 Magnum-wielding vigilante San Francisco cop. Politically speaking, Mr. Eastwood confounds categorization. Though he's a Republican who was once mayor of the California town of Carmel and recently pledged his support to the Romney campaign, he's also pro-choice, pro-gay marriage and against most of the recent wars that the United States has fought. He supported John McCain in the 2008 election, but said this to the Huffington Post after the election: "Obama is my president now and I am going to be wishing him the very best because it is what is best for all of us."

So was it worth the risk?

Contemporary political conventions are carefully scripted affairs from top to bottom, so Mr. Eastwood's presence and performance were about as conspicuous as an Obama button on the convention floor. It was weird, stunning, and kind of fun, even if it will likely do very little for Mr. Romney's campaign. Of course, there probably never was much chance of that anyway. It was a safe bet that Mr. Eastwood wasn't going to use his time on the podium to pound home the GOP platform points.

Within the flow of the convention itself, the gobsmacking speech probably distracted from Marco Rubio, a rising star within the party who came out after Mr. Eastwood to introduce Mr. Romney. It could also be read as the Romney campaign or the GOP not knowing what to do with a bit of real celebrity firepower. (All apologies to Jon Voight, Janine Turner and Chuck Woolery.) At worst, it furthered an image of the Republican Party as out of touch, curmudgeonly, and resistant to change. One moment in particular, when Mr. Eastwood made a throat-slitting motion in reference to President Obama is a potential landmine. It signaled some severely curious decision-making by the Romney campaign, which, if a sign of things to come, will make time for rough going over the next couple months.

Of course, we should never underestimate the appeal of celebrity.

In a taxi after the convention, the driver remarked, "Clint Eastwood. That was awesome."

Then he laughed and repeated: "Clint Eastwood."

His day, it was pretty clear, was made.