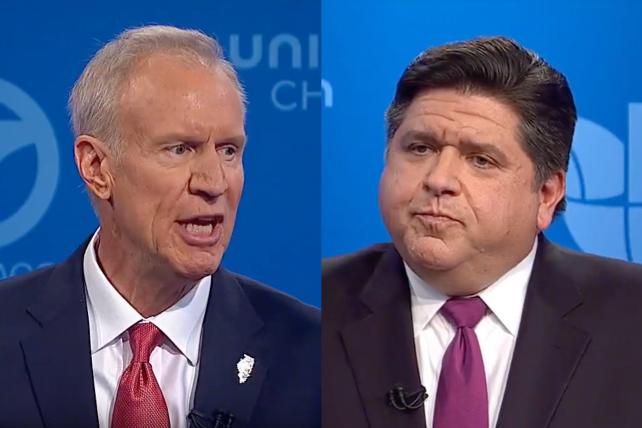 Department store pioneer Sam Wanamaker famously declared, "Half the money I spend on advertising is wasted; the trouble is I don't know which half." For many marketers, his 19th century lament still rings true. But when it comes to political advertising in one particular area of the country, we know exactly which half is wasted.

TV and radio DMAs (designated market areas) cross state lines in various parts of the country, and much of the time that works out just fine—particularly for brand advertising and merchants that routinely draw customers from a wide region. But when it comes to political advertising, an ad for a local candidate in State X is, of course, useless for a person who lives and votes in neighboring State Y. Yet this person still has to endure the message because of DMA bleed-over.

Numbers rounded. Spending shown on by party excludes $1 million in other spending (mostly advertising by advocacy groups that doesn't explicitly support a specific candidate or party).

Numbers rounded. Spending shown on by party excludes $1 million in other spending (mostly advertising by advocacy groups that doesn't explicitly support a specific candidate or party).

According to an Ad Age Datacenter analysis of political-ad spending from Kantar Media, the problem is most maddeningly acute in the St. Louis DMA. From January 2017 through Election Day next month (including advance bookings), 47 percent of the spending on TV and radio political ads for races tracked by Kantar directed at the Missouri city and its suburbs are for Illinois candidates. That equates to $29 million of the $62.1 million in Republican and Democratic spending in the St. Louis market (both by candidates themselves and groups, such as PACs, supporting them) tallied by Datacenter.

That's wonderful if you happen to be a St. Louis station owner; for everyday residents of the metro area, though, it's a recipe for media misery.

All day, every day, St. Louis media consumers have to hear J.B. Pritzker say the likes of "I've met people all across the state who've struggled because of Bruce Rauner's budget crisis" (see the first ad below). The "state" is not Missouri, but Illinois; Rauner is the incumbent Republican governor there and Democrat Pritzker wants his job.

Missourians in the St. Louis DMA also have had to endure a literal puppet show (the second ad below) with this dialogue spoken by a puppet: "J.B. Pritzker—he's a puppet" (one being controlled by Mike Madigan, the speaker of the Illinois House of Representatives, the Rauner campaign maintains).

Exacerbating the messaging-overkill and DMA bleed-over problem in the Illinois gubernatorial race: Pritzker happens to be a billionaire who can afford a lot of ads. As Illinois state politics reporter Tony Arnold of NPR-member station WBEZ of Chicago reports,

There's a new record in campaign finance. Democratic billionaire J.B. Pritzker has given his own campaign for Illinois governor more than any other self-financed candidate in U.S. history. An heir to the Hyatt franchise, Pritzker has given his campaign $161.5 million. This is not adjusted for inflation, but he is closing in on that, too. The previous record for self-financing a campaign was set by Meg Whitman in her failed 2010 bid for California governor, who gave her campaign $144 million of her own money.

FiveThirtyEight has a comprehensive rundown of various polls tracking the Illinois gubernatorial race (spoiler: Pritzker is ahead by double digits).