Skittles didn't take long to weigh in after Donald Trump Jr. equated a bowl of the colorful candy to Syrian refugees, seeking to distance itself from any presumed connection to the son of the Republican presidential nominee.

For those who missed the latest edition of the tweet heard round the world -- there's been a few of those this campaign -- here's what Donald Trump Jr. posted Monday evening: 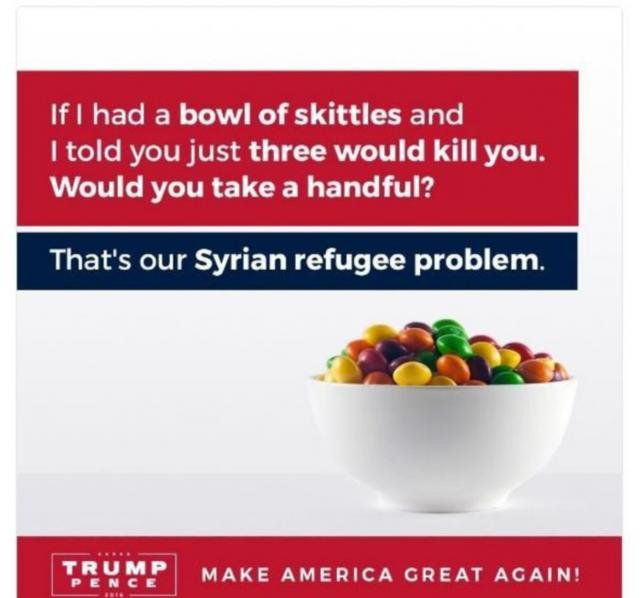 By Monday night, Skittles was trending with more than 30,000 mentions. Donald Trump Jr.'s tweet had thousands of likes and retweets.

Skittles are candy. Refugees are people. We don't feel it's an appropriate analogy. We will respectfully refrain from further commentary as anything we say could be misinterpreted as marketing.

Tuesday morning, the hashtag #SkittlesWelcome was trending in the United States on Twitter.

I just gave to UNICEF as a tiny effort to cleanse the universe of @DonaldJTrumpJr 's disgusting lack of humanity. #SkittlesWelcome

I don't normally eat #skittles but after their response to the moronic analogy by @DonaldJTrumpJr, I'm buying some today! #SkittlesWelcome

While Donald Trump Jr. was the one whose tweet got the buzz, former Illinois Congressman Joe Walsh pointed out that he had made the same connection back in August, albeit without a picture of a white bowl filled with the colorful candy.

Hey @DonaldJTrumpJr, that's the point I made last month.

Skittles didn't seem eager to draw more attention than necessary to its unwilling enlistment in the campaign. Its consumer-facing brand page didn't refer to the issue on Tuesday morning. Those who checked the brand's Twitter feed, meanwhile, would have remained unaware of any politicially-charged social media issues. The tweet posted on Skittles Twitter feed Monday was a joke about Talk Like A Pirate Day.