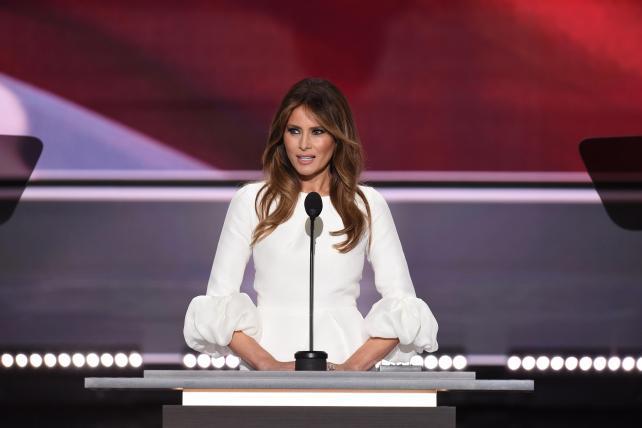 The Republican National Convention taking place this week at Cleveland's Quicken Loans Arena is a world apart from the rest of Cleveland, even though it's right downtown. Protesters have been instructed (via a permitting process) to use designated areas for their marches many blocks away from the Q, as locals call it, which means that protests aren't falling on the deaf ears of the protestees (RNC delegates) -- they just literally can't be heard by the intended targets.

An exception for a good portion of Monday afternoon: a lone pro-Jesus, anti-Trump street preacher just outside the heavily secured entrance area of the Q on East 4th Street, aka Media Row -- a one-block stretch where media organizations including MSBNC and The Washington Post have set up temporary outposts. The guy had a megaphone, which made him impossible to ignore, hard as everyone tried; he had disapproving things to say about the evils of homosexuality, Donald Trump's pursuit of filthy lucre, and I'm not kidding, "fornication." I suppose that since he was just one guy -- not part of a potentially intimidating group of marchers -- police let him be.

Lest visitors get the wrong idea about Cleveland, another guy silently standing behind the street preacher held up a sign that read "THIS HATE IS JUST VISITING. CLEVELAND LOVES" -- with a heart symbol in place of the "O" in "LOVES."

The Q has been sealed off from Cleveland by a series of temporary concrete barriers and 10-foot wire fences. Just beyond the anti-fornicator, Secret Service police -- the uniformed division, who wear bulletproof vests plainly labeled "SECRET SERVICE" (paradox!) -- checked credentials at the mouth of a long, narrow temporary outdoor walkway enclosed by those 10-foot fences. "I feel like cattle," I heard a delegate say as we were all herded into the passageway leading to a security-check tent.

There was a democratizing aspect to this indignity, as absolutely everyone had to submit to it. Right ahead of me in line I spotted Ted Koppel, all by himself. (The 76-year-old journalistic legend is in semi-retirement, having left "Nightline" in 2005, though he still serves as an analyst for NPR, NBC News and the BBC.) As a New Yorker, usually I'm unfazed by celebrities of any sort, but the pre-teen fanboy in me insisted that I say hi.

"Mr. Koppel, I just wanted to say that I grew up watching 'Nightline' and it's great to meet you," I told him as a Secret Service policeman directed us to a specific magnetometer in the security tent. Ted Koppel shook my hand and thanked me, and then, as instructed by the Secret Service, emptied his pockets before walking through the magnetometer, so I could see that he carries a small bottle of Purell with him. He was gracious enough to not immediately apply the sanitizer after shaking my hand.

The RNC officially started at 1 p.m. on Monday. In addition to large broadcast platforms and suites set up for selected television networks, there are a series of smaller working spaces and designated seating for journalists on Level 5 of the Q. The arena can seat in the neighborhood of 20,000 fans for a sporting event, but thousands of seats were sectioned off so that everyone could see the elaborate stage set-up, complete with an elegant, curving white staircase leading up to the stage and a massive screen composed of 600 LED panels.

Of course, the real action kicked in around primetime, because the RNC -- like the Democratic National Convention next week -- is designed to be one big infomercial for the networks and news channels that turn over their airtime to it. For the most part, the lineup of speakers offered deftly assembled collections of TV-ready soundbites that swerved between apocalyptic condemnations of Hillary Clinton and gushing praise of Donald Trump.

Sitting through a three-hour primetime lineup of remarks by the likes of actor Scott "Chachi" Baio ("from the sitcom 'Happy Days'!," the announcer enthused), Willie Robertson of "Duck Dynasty" fame, assorted politicians and multiple people who were IDed on screen as "victim of illegal immigrants," seemed like a bit of an endurance test for the crowd, since protocol is to applaud wildly and break out into chants of "USA! USA! USA!" rather frequently.

If only the conventions awarded trophies and ribbons for Best Soundbites (note to the DNC: Think about it?). Using my primitive applause-o-meter (my ears), one of the honors would surely go to Colorado U.S. Senate candidate Darryl Glenn, who, speaking of Hillary Clinton, said, "We all know she loves her pantsuits. But we should send her an email and tell her that she deserves a bright orange jumpsuit!"

I was waiting in a long line for a bottle of water from a concession stand (rebranded as the Republican Roadhouse) when Donald Trump came on stage to introduce his wife Melania. I didn't miss any of it, though, because there are monitors everywhere and sound piped into every last corner of the joint. As I was paying up ($4.25 for a bottle of Aquafina), a nearby staff door popped open and a stadium worker emerged from it to stare at the monitor right next to me.

"That Miss Trump?" he asked me.

"Oh my," he said, looking quite impressed, before disappearing back into the bowels of the Q.

The truth is, we all put up with Chachi and other lesser lights because we were waiting for Melania. The crowd, of course, loved her. She was telegenic and composed and something of a relief in the wake of some of the angrier speakers, including former New York City Mayor Rudy Giuliani, who seemed to be on the verge of having an aneurysm earlier in the primetime block as he screamed about the menace of "Islamic extremist terrorism," fists waving. In the context of the Q and a very rage-filled evening, Melania Trump was a proverbial breath of fresh air.

As if to bookend my brush with Ted Koppel, as I and thousands of others exited the grounds of the Q via the same narrow fenced-in passageway we came in by, I spotted Charlie Rose walking ahead of me. He was in a suit and comfortable-looking sneakers, and it didn't take much maneuvering to pull even with him. "Hi, Charlie Rose," I said, introducing myself and shaking his hand. I asked him what he thought of the big show.

"Well, I think Melania did a good job," he told me. "I think she proved she can be a surrogate for him."

I mostly agreed with Charlie.

But remember, this was late Monday night, before the Melania Trump speech plagiarism story became a big thing and #FamousMelaniaTrumpQuotes became a Twitter trending topic.

In other words, it was a much more innocent time.